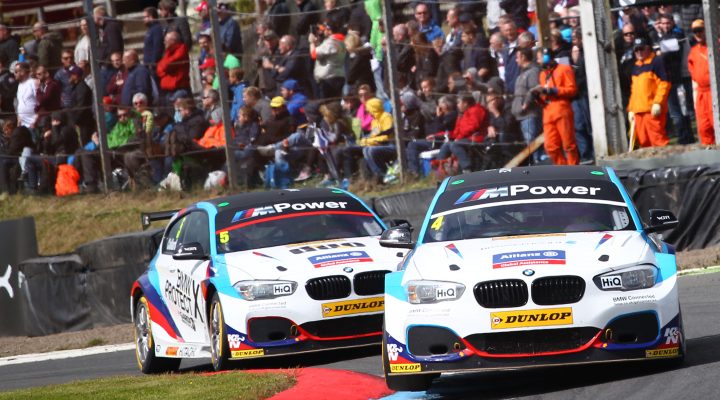 Team BMW heads to Rockingham this weekend aiming to maintain its advantage at the top of the Dunlop MSA British Touring Car Championship, with the West Surrey Racing-run squad topping the Drivers’, Teams’ and Manufacturers’ points tables.

Drivers’ Championship leader Colin Turkington has taken three wins and 10 podium finishes this year and was a double-winner at the unique part-oval Northamptonshire venue in 2014 in his BMW 125i M Sport on his way to the Drivers’ crown.

The Northern Irishman’s position at the head of the title battle, however, means he has to carry the maximum 75kg success ballast into the weekend, creating an extra challenge for practice, qualifying and the opening race.

“Knockhill was a very challenging weekend with the weather and with just how close the competition was, so it was very good to score three podiums to climb to the top of the championship,” said Turkington.

“Of course, that means I come to Rockingham with the heaviest car ballast-wise, and this presents its own challenges. But the BMW is one of the best-handling cars in the BTCC and this should give me a very good chance of scoring big points and maintaining the championship lead.”

Team-mate Rob Collard lies fourth in the points table with one win and seven podiums to his name. The Hampshire racer is the only driver to have scored points in every one of the 21 races held in 2017 and is aiming for another big score this weekend. Collard carries 48kg ballast and has taken three BTCC podiums at Rockingham, including a third last year, from 18th on the grid.

“As a circuit, Rockingham is technically very demanding,” said Collard. “The section of oval we use is very wide and provides great overtaking opportunities while there are plenty of tight areas that should allow the BMW to play to its strengths.

“I’m fourth in the championship and still right in the thick of the title battle and year-on-year my results with the 125i M Sport have been improving here. Last year I finished third from 14th on the grid, so I’m confident of showing strong pace again and scoring more good results.”

BMW Pirtek Racing aims to bounce back from a tough event at Knockhill and challenge for the top step of the podium this weekend.

Andrew Jordan, who lies seventh in the championship, has a strong record at Rockingham. He has finished on the podium five times in the past five seasons at the circuit and claimed a double victory in 2013 on his way to that year’s BTCC title.

“I’m pretty confident of being close to the front at Rockingham, especially after the kind of lap times we were able to produce at Knockhill with the same 27kg ballast in the BMW,” said Jordan.

“Unfortunately, circumstances meant we couldn’t turn that speed into the results we deserved, but if we can have a trouble-free weekend, I’m sure we can be on the podium.

“Rockingham is a challenging circuit with a good blend of fast, sweeping corners and tight, twisty sections. This makes judging the set-up pretty tough and that’s where having an experienced team like WSR behind me should pay off.”

WSR, which claimed its 250th BTCC podium at Knockhill last time out, is a five-time winners in the series at Rockingham.

Dick Bennetts, Team Principal, added: “We’re leading all three championships, which is a credit to the hard work from everybody at WSR and our engine tuner Neil Brown Engineering this year.

“Historically we’ve had mixed results at Rockingham, but we’ve won there three times in the last three years, so there’s a clear trend that we’re getting towards the BMW’s sweet spot at what’s a very tough circuit to judge the set-up for.

“The plan is to have Colin, Rob and AJ right in the hunt this weekend and to stay on top for the trip to Silverstone.”