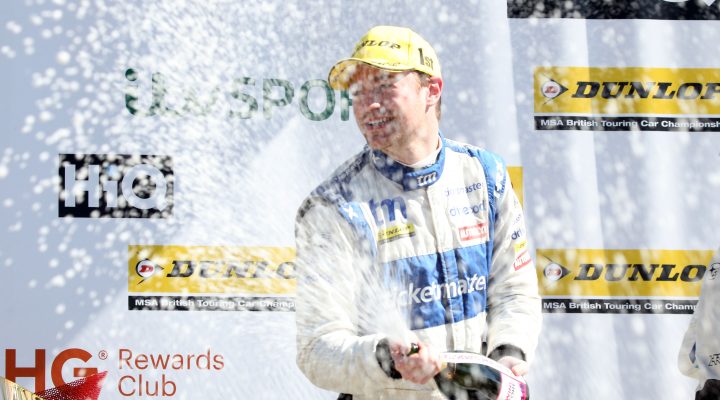 Cole’s Subaru Levorg blasted away from pole position and fended off early challenges from fellow front row starter Jack Goff. The Eurotech Racing Honda was often within touching distance of the race leader, but rarely close enough to make a significant move.

29-year-old Cole gradually began to pull away from the chasing pack as Goff fell back into the clutches of Ashley Sutton’s Subaru. Championship contender Sutton had previously defended from the fast starting MG of Josh Cook, who had himself surged from eighth on the grid up to fourth.

Once Sutton had pegged Cook’s MG6 the young charger began to haul his Levorg onto the the back of Goff’s Civic Type R. Sutton’s moment would come on the second to last corner of the final lap as he made a move stick to give Adrian Flux Subaru Racing an impressive one-two finish.

“I’ll take that,” beamed Sutton. “I was happy with third but Jack (Goff) ran a little wide into the hairpin on the last lap and I made it through. It’s another phenomenal result for Adrian Flux Subaru Racing. Josh (Cook) was on full attack mode, as you’d expect, and he could have stuck it up the inside a few times. We have to balance the car’s strengths over the lap with its weaknesses and play it accordingly.”

“I’m surprised I held on as long as I did – I knew it’d be an uphill struggle,” said a relaxed Goff. “The car was fantastic but I was struggling in the traction and braking zones late on. They can come up the inside or around the outside like at Snetterton in that situation. It’s another bit of silverware for our lads. Josh (Cook) was eager to get past into the last corner and was bumping a bit but that’s racing and we held on.”

Title protagonists Tom Ingram, Gordon Shedden and Rob Collard endured a difficult outing, with all three failing to score points. Ingram’s Speedworks Toyota suffered brake problems off the line and soon retired, whilst Shedden’s Honda picked up a puncture late on. Collard’s BMW 125i M Sport failed to make any real progress from 20th on the grid, and the experienced racer subsequently couldn’t make the points for only the first time this season.

The plaudits for Round 22, however, go to race winner Cole as he scored his first success in Britain’s premier motor sport series. “I don’t want to say I’m speechless again, but I am,” he said. “The race couldn’t have gone any more perfectly. I knew the front-wheel drives would be quick at the start. It was about getting away well and holding them off until they started to struggle. I knew the temperatures would suit us towards the end of the race, but at the start Jack (Goff) just wouldn’t go away.

“You can feel the tyres – it’s super abrasive here and we’re not as quick at the beginning here, but we can manage it better towards the end. If it’s a win, Ash (Sutton) can bugger off, but anything else, then fair enough. Race two with max ballast and hard tyres will be tough, it’s getting warmer though so you never know.”