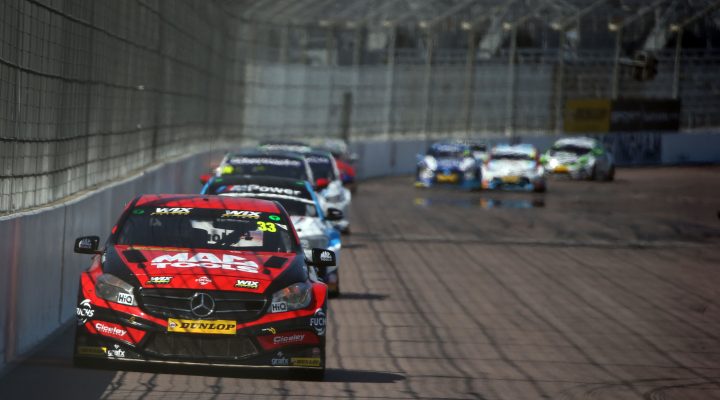 Adam Morgan put a torrid recent run behind him at Rockingham last weekend (26/27 September), as the Ciceley Motorsport driver enjoyed a return to the BTCC rostrum for the first time in more than four months.

A brace of podiums and eight top ten finishes from the opening nine rounds of the campaign saw Morgan placed fifth in the overall standings and second in the Independents’ battle leaving Thruxton. Since then, though, the Mercedes man has found himself routinely out-of-luck, failing to score nine times out of 12 and managing a best finish of just eighth position, sending him tumbling down the points table.

Rockingham, however, marked a welcome turning-point for the 28-year-old, who converted sixth in qualifying into eighth in race one and sixth in race two, withstanding a sustained, dual-pronged attack in the closing stages from the BMWs of Andrew Jordan and Rob Collard.

Rewarded for his staunch defence with a front row berth for the reversed grid finale, Morgan made a good start and proceeded to keep leader Andrew Jordan honest throughout. He was eyeing a late move until the appearance of the safety car for Collard’s beached BMW blunted his charge and obliged him to settle for the runner-up spoils – and a third Independents’ win of the campaign.

“The tyres went away behind the safety car and I struggled for grip at the re-start,” explained the Lancastrian. “I had Jason Plato all over me, but I was able to hang on and keep second place.

“Our season starts here! I honestly believe that this is the speed we have had all year, but we have just had this really bad run of poor luck. Our pace has always been good enough to put us in the top ten in the races and now, we have proved again what this car can do. With the reliability sorted, we should be able to fight for more podiums before the end of the campaign.”

“A run of disappointing results can knock the confidence of the whole team, but Adam turned it around at Rockingham and reminded everyone just what he is capable of,” added Ciceley Motorsport Commercial Director, Norman Burgess. “The BTCC is a tough championship and you have to get everything just right, but we proved that we are fighters and Adam did a great job in taking second place.

“With a bit more luck, we would have been higher up in the championship, but Adam isn’t here to make up the numbers and will be after podiums next time out at Silverstone.”

Morgan sits just a single point outside the top ten in 11th in the overall championship classification and fourth in the Independents’ Trophy, with Ciceley Motorsport respectively eighth and fifth.