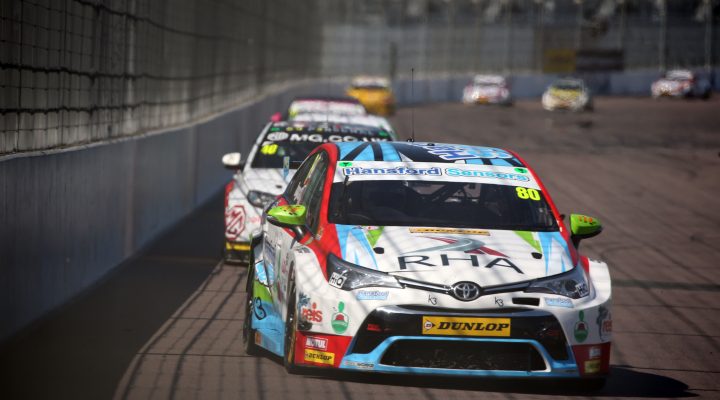 Speedworks Motorsport’s Tom Ingram took maiden weekend Dunlop #ForeverForward honours at Rockingham, as he produced a stunning drive from back of the pack to ninth in race two, gaining a staggering 23 positions.

That total was the joint-highest seen in a single race, matching Colin Turkington’s fightback in race two at the Brands Hatch Indy season opener.

Ingram had a battle on his hands after brake failure struck on the warm up lap of race one. The Toyota man had shown front-running pace through Saturday, topping both Free Practice sessions, and despite this setback, he managed to showcase that pace once again through Sunday.

Reigning champion Gordon Shedden saw his championship challenge take a knock as contact with Rob Austin’s Toyota saw him out of race one and on the back foot. The second bout was no better for the Scot – the Halfords Yuasa Racing Honda Civic Type R forced into retirement once again. This left him to salvage what he could in the finale – making the points with a determined drive to 12th from 31st on the grid. His 19 spots gained yielded second in the #ForeverForward running.

Retirement in race two for team-mate Matt Neal saw him recover 16 places to also make the points with 13th – 18 positions to the good f0r the weekend saw him third in Dunlop’s tally.