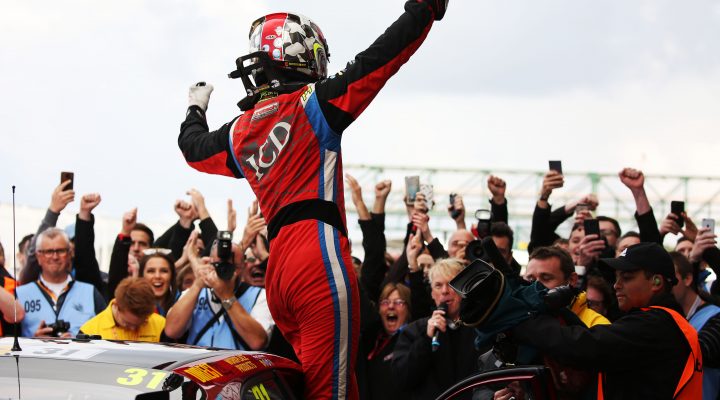 Jack Goff returned the favour on race one winner Tom Ingram as the Eurotech Racing driver claimed a hugely popular and impressive win in the second BTCC bout at Silverstone.

The battle for the final podium position may have major implications on the race for the title as championship leader Ash Sutton made a last gasp move by rival Colin Turkington to take the place.

Ingram’s Toyota made another stellar getaway as the pole position man fended off Goff’s Honda off the line. The Type R racer hounded the Avensis in the early running, however, and made a firm move stick into Becketts on lap three. Goff then went on take a dominant victory – his first for Eurotech Racing.

“The second one took a little while to come,” said Goff. “It’s been over two years now! It’s for all the Eurotech guys – we’ve had a tough time with Jeff (Smith)’s accident and it’s for all our sponsors too. I watched some old footage of Andy (Jordan) and Jason (Plato) back and I saw that at turn one we might get a bit of help with the softer compound tyre. The car was fantastic.

“It’s usually pretty good but performance over the race distance is sometimes our downfall. It was great there though even with ballast. The first NGTC pole for a Honda here and a first win for Jeff as team boss. Brilliant!”

Ingram fell slightly into the clutches of the chasing back but the scrapping behind enabled him to hang on to second.

“With 75kgs on a hard tyre it was never going to be a fantastic combination, so to come away second just behind Jack (Goff), I’m made up with it,” confirmed Ingram. “I was fully aware of those guys just behind me and I felt I was struggling from lap eight or so. Colin (Turkington) was on the same tyre as us and I knew we’d be fairly comparable and Ash was working his way through so it was only a matter of time really.”

Adam Morgan’s Mercedes held third early on but he was muscled down the order and as the chequered flag was being readied we faced a nail biting title clash between Turkington and Sutton. Team BMW’s Turkington was rightly in defensive mode as Sutton nosed his Subaru down the inside into Luffield on the final tour, and the former couldn’t hang on as the young standings leader completed the pass on the approach to Woodcote.

“Got to save the best ‘til last as they say!” said Sutton. “It’s great to be back on the podium at our weakest track, so we’re pleased with that one. It was one of those calculated risks. I made a clean move around the outside into Brooklands and I got pushed off the track. I can’t just disappear, and I was more than a car-length alongside. Sometimes you have to accept you’ve lost a battle. It could be really important at the end of the season – you have to take those risks sometimes.”

Rob Austin and Adam Morgan renewed an old rivalry for fifth place. An agressive defence from Morgan’s A-Class led to minor contact at one stage before Austin eventually sweeped past in the Handy Motorsport Toyota.

Reigning champion Gordon Shedden kept his feint title chances alive with a seventh place finish, ahead of the impressive Rob Huff. The former World Touring Car Champion is filling in for the recovering Tom Chilton this weekend and Huff showed all of his class in the Power Maxed Racing Vauxhall.

Dave Newsham took ninth for BTC Norlin Racing, and with it pole position for the reverse grid race later today, whilst Micheal Epps grabbed his second top ten finish of the day.