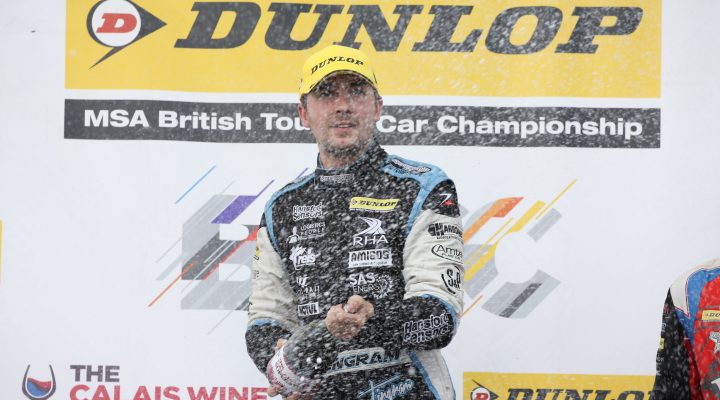 Tom Ingram took an early lead from pole-sitter Jack Goff in the opening BTCC contest at Silverstone before the Speedworks Motorsport star went on to claim his fourth victory of the season.

Eurotech Racing’s Goff kept Ingram honest throughout with the young duo separated by less than a second for much of the race, but the Toyota man would hang on until a red flag ended the encounter prematurely due to a high-speed accident further down the field.

Adam Morgan grabbed an impressive – if not lonely – third place finish, as the Mercedes man initially lost touch from the lead pairing but also pulled clear of the chasing pack.

The fight for fourth provided the main bulk of the action with the likes of Jake Hill, Mat Neal, Mat Jackson, Ant Whorton-Eales scrapping for position.

Neal and Jackson’s challenge ended after contact approaching the start/finish line, whilst Whorton-Eales took control of the place as Turkington’s BMW fell down the order when rain entered proceedings on lap six.

Turkington fought back as the conditions settled and he would eventually squeeze his BMW 125i M Sport by Whorton-Eales’ Audi in the latter half of the bout. Unfortunately for Turkington, however, was the fact that main title rival Ash Sutton was right behind him at the finish – reducing the impact that Turkington could make on the points deficit.

The race ending moment effectively came on lap 14 when a high-speed multi-car clash first brought about a safety car period, before the race was later red flagged in order for recovery and medical teams to complete their procedures.

The accident occurred when Chris Smiley’s Chevrolet touched Aron Taylor-Smith’s MG on the run down to Maggotts. Rob Collard’s BMW was collected in the melee and his damaged machine left the track, slid wildly across the grass, before firing back across the circuit at Becketts. An unsighted Will Burns (VW) then slammed into Collard’s car, with Andrew Jordan (BMW) also unfortunately involved, ending the trio’s respective efforts and eventually resulting in the race being cut short.

Collard and Burns are both being taken to hospital for precautionary measures, with the latter facing rib injuries, and neither driver will take part for the remainder of the day.

When the clear up was complete it was Whorton-Eales in sixth – his best ever BTCC result – whilst BTC Norlin Racing’s Dave Newsham and Laser Tools Racing’s Aiden Moffat both produced heroics to take seventh and eight respectively. Chevrolet driver Newsham rose impressively from 15th on the grid, whilst Moffat stormed his way through from 23rd.

Handy Motorsport’s Rob Austin held ninth on the harder compound Dunlop tyre, which should stand him in good stead for the two further races later today, whilst Michael Epps provided some respite for the Team HARD stable with a top ten finish.

Tom Ingram said: “It was a bit of a strange one with that late incident. We had that safety car and you’re just focusing on where you need to drop the hammer and on keeping temperatures up. I got the jump on the restart and all of a sudden, I got the call that there would be a red flag. I really didn’t expect to start as well as I did as the right side of the grid was wet. I thought I’d be down in fourth or fifth but when they matter I seem to be able to pull them out of the bag. When the rain came down, it was the hardest thing. I had a huge moment at Copse. As soon as I hit the brakes, I slid on and the worst place to be is the lead in that situation as everyone uses you as a judge of the conditions and inevitably it’s the leader that falls off. To take another overall win as well as the Independents’ win is fantastic to get us back on track after that mid-season dip.”

Jack Goff said: “It all happened at the start really. We knew it was damp and we just picked up too much wheel-spin. I saw Tom (Ingram) was past and I had to give up that position. It wasn’t too bad to start with but it was a little bit greasy into turn one. Then the rain started to come down. Adam (Morgan) seemed strong into turn two on the brakes and he was hunting us down but we were able to keep the car on track. We started to catch Tom (Ingram) just as the safety car came out and it was starting to dry but the red flag obviously put an end to it.”

Adam Morgan said: “That’s a mega start to the day for us. I got a bad start and had a coming-together with Jake Hill. I just got my head down then and chased down Jack (Goff) and Tom (Ingram). It was a bit of ‘suck it and see’ when the rain came down. I was gauging it from the guys around me. I had a bit of a look into Brooklands. We were strong there and Jack (Goff) was running a bit wide. Maybe another couple of laps and we’d have got second.”