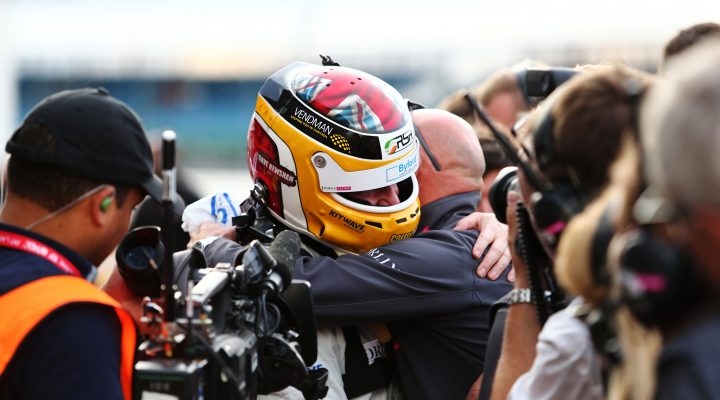 BTC Norlin Racing heads to the Brands Hatch finale on a high after a maiden podium finish at Silverstone, in what is the team’s first year in the Dunlop MSA British Touring Car Championship.

It was a day of personal bests, complementing that overall trophy, with Dave Newsham sealing third and another Independents’ Trophy while team-mate Chris Smiley came home seventh.

The outfit had been building a head of steam over the course of recent weekends, with several top ten finishes at both Rockingham and Knockhill indicating their rapid progress over the course of 2017. This run left Norlin eyeing its first podium and Silverstone was earmarked as a potentially fruitful hunting ground. Team Boss Bert Taylor highlighted the satisfaction of achieving a major marker he had set at the squad’s inception.

“We knew that we had all the ingredients for running in the top ten and getting onto the podium this year, and I couldn’t be happier that we have now achieved our goal,” said Taylor.

“Everyone has worked so hard, and the results are a reflection on the entire team. I would like to thank everyone that has supported us so far this year. We are a new team and it has been quite a rollercoaster. I am glad that they came on the journey with us, and cannot wait to see what we can go on to achieve at Brands Hatch.”

Chief Engineer Steve Brady echoed Taylor’s thoughts, saying: “It was a great weekend for us, and I have to thank the team, as it is the result of everyone working together that has achieved this.  We have great people, and the results in our first year have shown this.”

Newsham had set his sights on maintaining a top ten berth in Northamptonshire with an eye to a favourable grid slot for race three. That he got, starting pole, and a showcase performance saw him hold off Tom Ingram for third to make the final step on the rostrum. Though delighted, the Inverness-based racer admitted that he felt there was potential for even more.

“It was an incredible achievement for the team to get onto the podium – it’s our first year!” he said. “I can’t thank Norlin and our sponsors enough. I like to think I’m doing the business for the guys that put me here.

“The car was just mega. I had the pace and I gave myself a strong talking to after the worst start of my life. I could have even won it had I done better there.

“Every time we go out we’re learning more and we’re hitting the sweet spot. It’s a shame for us that the season’s coming to an end.”

“The car felt great and we kept getting quicker and quicker as the weekend went on,” added a delighted Smiley. “We have made some really good progress as a team, and we are aiming to finish the season on a high at Brands Hatch in a couple of weeks.”