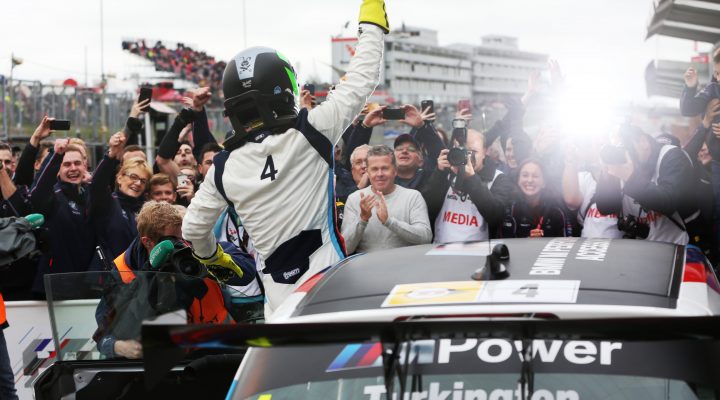 Thanks to the combined season-long efforts of Colin Turkington – who secured the runner-up spot in the Drivers’ tally – and Rob Collard, Team BMW were crowned Teams’ Champions while BMW took the Manufacturers’ crown.

For West Surrey Racing, who run Team BMW from their Sunbury-on-Thames headquarters, the double-title success means they have now won an incredible six outright BTCC crowns in the past four years with the BTCC BMW 125i M Sport – a car of their own design, build and preparation.

Turkington, who was one of two Drivers’ Championship contenders on raceday, produced one of the performances of his career in Round 29 to climb from 15th on the grid to take his fourth victory of the season and set up a tense title-decider.

Unfortunately for the Northern Irishman, despite magnificently climbing from 10th to fifth within two laps, his title campaign ended with broken suspension after he was hit by an unsighted rival car.

“It’s a great achievement by the whole team to win the Teams’ and Manufacturers’ titles today and everybody should be congratulated for the hard work they’ve put in over the season,” said Turkington. “I was proud of my race two drive; my best race for a long time, and I felt we had real momentum at that point. Unfortunately, it wasn’t to be. I was in the wrong place at the wrong time and got hit. It’s never easy to come away second best when you’ve gone so close and I’m gutted, but we can still hold our heads high at the job we’ve done this year.”

Team-mate Rob Collard did not race; the Hampshireman being withdrawn from the event on medical grounds ahead of qualifying – a legacy of his heavy accident at Silverstone last month.

He returned to the circuit on Sunday to celebrate his birthday and support the team’s efforts to seal the silverware. Courtesy of his magnificent form throughout the season, retained his fifth place in the Drivers’ points table.

“It’s a real shame I wasn’t able to race this weekend, but I’m proud to have played my part in the Teams’ and Manufacturers’ Championship wins for the second year in a row,” said Collard. “I’ve had seven podiums and a win earlier in the season and I’m pleased with this. To finish fifth in the points even after missing the last five races shows how competitive we’ve been across the year. The BMW has been an excellent car at all circuits and two titles is what the whole team deserves.”

Dick Bennetts, Team Principal, added: “It’s a fantastic result to win the Teams’ Championship for the third time in four years and to give BMW the Manufacturers’ title in their first season back in the BTCC using the new BMW B48 engine.

“Every member of the team can be very proud of what we’ve achieved and we are also extremely thankful to our partners, technical suppliers and sponsors, without whom none of this would have been possible.

“Colin’s drive in race two was incredible and the performances he and Rob have put on across the season have shown their quality again and again. I’m gutted Colin’s title bid ended the way it did, but that’s motorsport.”