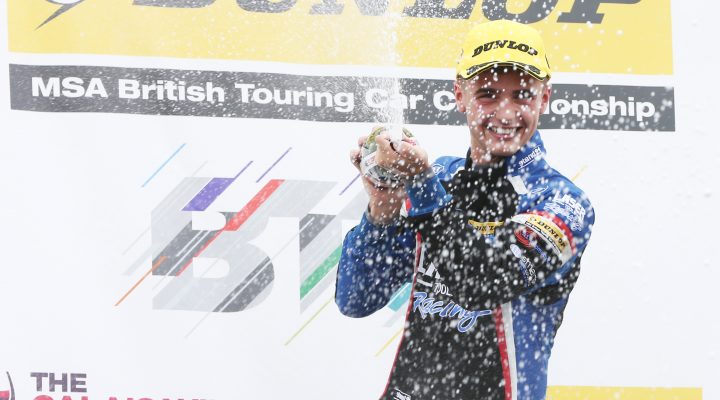 Young Scot Aiden Moffat rounded out his Dunlop MSA British Touring Car Championship season with a race win at Brands Hatch after a superb drive under pressure in the opener. A second top five finish followed later in the day to cap Moffats’s best season to date in the BTCC.

Laser Tools Racing’s Mercedes-Benz A-Class goes well at Brands Hatch and the 21-year-old started his weekend with the second fastest time in Free Practice 1. Qualifying, afflicted by two stoppages and a heavy shower, saw him second on the grid for the opening race after his best qualifying performance of the season.

Last-minute tyre choice was critical with changing conditions ahead of the opener and Moffat started on Dunlop SportMaxx dries – tiptoeing into the first corner.

Up ahead pole-sitter Jack Goff lost grip and pirouetted across the road ahead of him, propelling the Mercedes into the race lead where had to cope not only with being the barometer in tricky conditions but with pressure from Ash Sutton.

Tom Ingram in the Speedworks Motorsport Toyota Avensis eventually took second place from Sutton before setting off in pursuit of Moffat – the two spending half the race running nose-to-tail. In a superb display, the BRDC Rising Star never put a wheel wrong and withstood 15 laps of pressure to win by just 0.345 seconds.

“It was hard but not hard, strangely,” said Moffat. “The conditions were tough and the track was really slippery but I love those conditions; I always feel at home in them, possibly because it is a bit like the track surface in my early oval racing days. The car felt great and although I knew Tom (Ingram) was behind me – I felt confident. I’m so pleased for the team after an up and down season, but it was so good to get a second win.”

That race one win yielded a race two pole position, but the regulation success ballast meant his car would be 75kgs heavier. As the lights went out, Moffat launched from pole position and hung onto his lead, keeping Tom Ingram at bay before Mat Jackson nipped through into second place.

As the two duelled, Colin Turkington’s BMW 125i M Sport carved through the field and rocketed up from 15th on the grid to second, swiftly latching on to the tail of the lead Mercedes.

To keep his championship hopes alive, Turkington needed the best possible finish and as he closed on Moffat, there was contact into the first corner, forcing the A-Class wide and dropping Moffat to fifth place.

“If I’d have lost the lead but kept second, I could have accepted that I suppose, but fifth felt like poor reward for my efforts,” said Moffat.

“I hadn’t put a wheel wrong. I was defending and had managed to hang on to the lead for 12 of 15 laps. Even with the ballast the car felt good and we had taken a real step forward with the set-up and I was looking good for another win.”

The final race of the season began in wet conditions but the circuit started to dry. Moffat’s Dunlop BluResponse wet tyres began to overheat with little surface water to keep them within their operating window. The Scotsman persevered but eventually fell to 14th place.