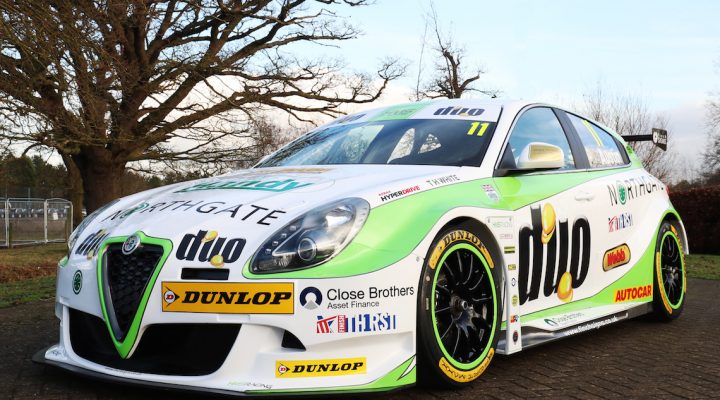 Little over four months since officially confirming its intention to bring the legendary Italian marque back to the Dunlop MSA British Touring Car Championship, through a key tie-up with the Alfa Romeo Dealer Council, the Swindon squad’s new-for-2018 charger took pride of place on the Motorsport News BTCC stand.

Revealed to huge crowds and throngs of gathered broadcast and print media by race-winning HMS driver Rob Austin and Team Principal Simon Belcher, the exquisite white and green Alfa most certainly turned heads, with the Giulietta to see its first action at BTCC Season Launch on 27th March at Donington Park in Leicestershire.

As well as the official launch of the brand new Giulietta, Austin and HMS also announced an enhanced commercial partnership with long-standing backer Duo, resulting in the team being entered in the 2018 British Touring Car Championship as Duo Motorsport with HMS.

Notably too, Northgate remains onboard with Austin and HMS as a key partner for a second season in the UK’s premier motor racing championship while a new multi-season deal has also been agreed with existing partners Close Brothers Asset Finance. “We are so proud to finally be unveiling the new Alfa,” said Evesham racer Austin. “Everyone in our team has put in an incredible amount of work to keep the project on schedule while maintaining an impressive attention to detail.

“We also have to give a huge amount of credit to our fantastic technical partners, this is a very unique BTCC car and both Willie Poole Motorsport Services and ABS Motorsport have really gone above and beyond, on the shell and bodywork respectively, to overcome the challenges involved in such a unique design and still meet their deadlines.”

“To see the Alfa here today is the result of the hard work and passion of so many people, and also the passion of our fantastic sponsors. We consistently work hard to provide them all with unquestionable value from their support year-on-year and, as such, our partnerships strengthen and grow.

“So, seven years into our partnership together with Duo, we are proud to be entering the 2018 British Touring Car Championship as Duo Motorsport with HMS.

“Duo have been a huge credit, not just to us but to UK motorsport for many years, supporting drivers all the way up the ladder to their own BTCC team. The passion for motorsport and desire to win that the Alfa Romeo brand is so well known for is equally prevalent in Duo as well as every member of the HMS team, so we are excited to see the three brands coming together to create something special like this.

“We are also excited to announce that we retain the support of business vehicle hire market leader Northgate after a very successful 2017 programme, and we have a lot more activities planned for the 2018 season. Additionally, we have entered an exciting new multi-season partnership with Close Brothers Asset Finance who will be featuring much more prominently on the new HMS Alfa Romeo BTCC car.”

With two months to go until Season Launch, Duo Motorsport with HMS now heads into a comprehensive winter testing programme for the Alfa Romeo.

Austin and Team Principal Belcher are justifiably confident the squad will be able to make big strides with the development and set-up of the Giulietta over the coming weeks, and the entire team is relishing the opening weekend of the new season at Brands Hatch (7-8 April) – the venue of Austin’s first win for HMS during the 2017 championship finale.

“It’s very emotional to see the response to the Alfa Romeo we have designed and built ourselves from the ground up,” said Belcher. “I did a very hard thing in stepping out of the driving seat myself in the BTCC to spend more time overseeing the team’s progress and then developing such a stunning car.

“Our engineer Matt Taylor and the rest of the team have done an incredible job and I am extremely proud of what we have achieved. However, a beautiful car is only part of the journey – now we need to make it win!”

“All in all, we are in a very good place”, added Austin, “We have a great team of guys here who have built a beautiful BTCC car which, on paper, looks to be a notable step forward from our previous car.

“We have great support from some fantastic partners and we have reintroduced an truly iconic brand back into top level British motorsport – all this and it’s only 11 January!

“So, we have lots of time to develop this car and give ourselves the best possible chance at starting the 2018 season where we finished 2017.

“This is the biggest and most important season of my 27-year career and I cannot describe to you how excited, motivated and determined I am!”