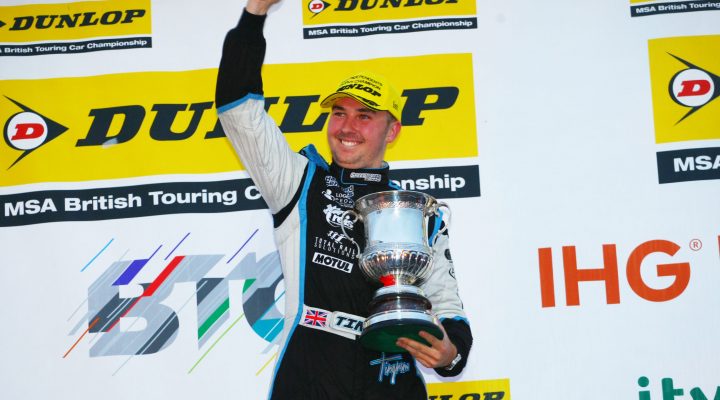 Tom Ingram has one goal on his mind ahead of the 2018 Dunlop MSA British Touring Car Championship – building upon the impressive progress he and Speedworks Motorsport made last year to clinch the most coveted crown in national racing.

Ingram and Speedworks came out-of-the-blocks flying at the start of 2017, with the talented young Bucks ace tallying eight top five finishes from the opening nine rounds – including a brace of emphatic victories – to establish a commanding 17-point advantage in the overall Drivers’ standings leaving Thruxton in May.

In only his fourth campaign in what is commonly regarded as the world’s premier and most fiercely-disputed tin-top series, Ingram looked set to truly take on the sport’s biggest-hitters, but a luckless mid-season run would conspire to derail his charge.

Undeterred, the 24-year-old came back fighting over the second half to lift the Independents’ Trophy, with Speedworks similarly doing the business in the Independent Teams’ tussle as the Cheshire-based outfit sealed its breakthrough BTCC success in fine style.

Ingram ultimately placed third amongst the 37 high-calibre contenders – some of the finest touring car protagonists on the planet – in the final Drivers’ table, ahead of defending champion Gordon Shedden and three fellow former title-holders. Along the way, he led more laps than any of his adversaries, posted the best average qualifying record of anybody in the field for the second year running and reached the podium on nine occasions – four times the top step.

In recognition of his outstanding performance behind the wheel of Speedworks’ #80 Toyota Avensis, Ingram was voted the series’ best driver of 2017 by team bosses in a poll held by leading specialist publication Motorsport News. Now, he wants to live up to that billing by challenging for British motor sport’s most prestigious prize – the BTCC Drivers’ crown.

“After what we accomplished last year, there can only be one objective for 2018 – the overall title,” said Ingram. “There was never any question that we would be staying with Speedworks this year. They’re like my second family. The dynamic between us works so well – it has since day one, and it’s getting stronger all the time.

“I must pay tribute, too, to the vital ongoing support of our loyal partner Hansford Sensors, without whom none of this would have been possible. We’re heading towards a milestone in our relationship with Chris and his team, and it’s crazy to think we’ve gone from Ginetta Juniors right up to aiming for the BTCC title together.

“We’re also incredibly lucky to have the backing of key returning sponsors the Logistics People, Total Rail Solutions, Reis Motorsport Insurance and Global Brands, who similarly play a major role in getting us on-track. I owe a massive ‘thank you’ to each and every one of them.

“All that said, of course, we’re still a comparatively small, tight-knit team, so to do what we did last season with the resources we had – up against a whole host of more experienced and better-funded rivals – was nothing short of phenomenal. Winning both Indie championships was a huge tick in the box, but we don’t plan to stop there – we want to push for even more this year, and I see no reason why we can’t achieve that.

“Several teams are rolling out new cars, whereas the Avensis is a proven package which means we can hit the ground running in the curtain-raiser at Brands Hatch in April, and on the driving side, I’m not afraid of anyone.

“I’ve shown that I can race against and regularly beat the Jason Platos, Colin Turkingtons and Matt Neals of this world, and I think 2017 demonstrated that the tide is turning in the BTCC and that the old guard that have ruled the roost for so long are being replaced by the new generation. And I want to be the standard-bearer of that new generation for many years to come.”

“2017 was a real watershed campaign for Speedworks,” echoed Team Principal Christian Dick. “To make the leap from occasional podium-finisher and race-winner to genuine title contender marked a significant step forward, and the key to that was consistency. We scored points in more than 80 per cent of the races, and but for two torrid weekends at Oulton Park and Croft – through little fault of his own – Tom would have been right up there in the mix for the outright championship come season’s end.

“For us, there was never any doubt that we wanted Tom back in the car this year. He is an absolutely integral part of the team and he continues to get better by the day. Some of his drives last year were frankly mind-blowing, and if he maintains that curve of progression into 2018, everybody else should be very worried indeed.

“We proved what the Toyota is capable of last season, and considering the updates we have planned, we expect it to be even more of a potent proposition this year. With the renowned strength-in-depth of the BTCC, we’re under no illusions that a massive dogfight lies ahead – but we’re ready to come out punching.”

To check out Tom’s new-look website, head over to www.tom-ingram.com.