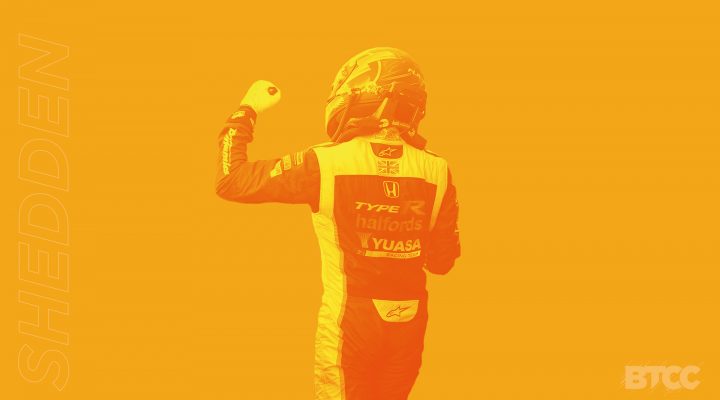 With 12 different drivers taking top honours in 2016, who would have predicted that the 2017 Dunlop MSA British Touring Car Championship finale at Brands Hatch would yield a record-breaking 13th different race winner?

Over the course of the next couple of weeks we’re reliving each of those victors’ efforts and next up it’s ex-Halfords Yuasa Racing man, departing three-time champ Gordon Shedden – Round Two’s winner.

After a restart, owing to Jason Plato’s stricken Subaru Levorg which was turned into the pit-wall off the line, Tom Ingram led the pack away and around the first tour following an impressively quick getaway. With his Speedworks Motorsport Toyota Avensis heavy on ballast as a consequence that victory in the opener, Shedden’s Honda looked the more potent package and duly swept by on lap two at Paddock Hill Bend.

In behind the lead pair, a battle between Rob Austin, Andrew Jordan, Rob Collard and Adam Morgan began to evolve, with the foursome line astern around the 1.27-mile Indy loop. Contact left Ant Whorton-Eales’ AmD Audi S3 beached at Clearways, meaning a brief period under the Safety Car, squeezing things up with just under ten laps left to run.

At the restart, it was all to play for. Shedden had looked as if he’d got it all wrapped up but Rob Collard in the Team BMW 125i M Sport was now the cat amongst the pigeons – or seemingly so, with Shedden’s car much the heavier, laden with 66kgs of ballast. He made light work of Ingram on lap 20 with a nudge at Paddock before making the move stick up the hill into Druids.

It looked as if he’d have it in him to challenge the Honda out front, but he failed to make further progress with time rapidly running out. The Scot ultimately had enough in hand and the lead trio remained as-you-were until the chequered flag fell.

Post race, the Honda man said:  “That was a very bizarre race, with the restart and everything. To win with 66kg in the car is really special. Weirdly, the car probably felt better there than it did in the first race without any weight, so we’re clearly going in the right direction.

“Rob [Collard] was coming on strong at the end, with a fair chunk less weight than I had – I’m glad it was over when it was over really. That was long enough!”

At the time, the indicators were there that the then-reigning champ would be a real force to be reckoned with once again in 2017 but ultimately, he closed the campaign – with his chase for three titles on the spin a fruitless one – just over 60 points shy of eventual winner Ashley Sutton.

That said, Flash had led the way in the standings as far into the season as the lead up to the Knockhill race weekend and tallied a further two top-step appearances. Strong competition at the top, however, was enough to see even Shedden falter as the season came to a head.