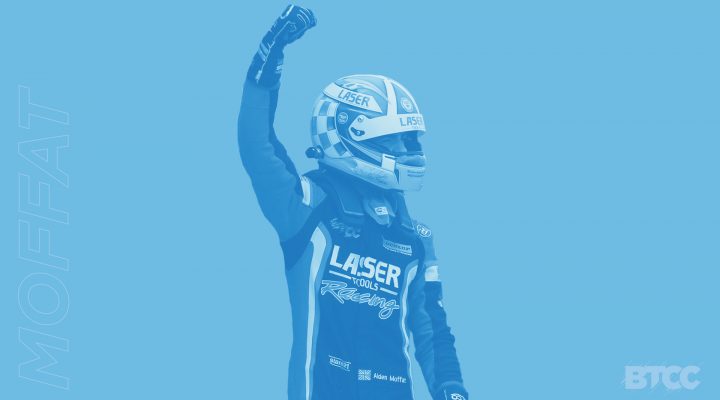 We’re remembering the efforts of each of 2017’s record 13 different winners in the lead up to the new campaign, and next under the spotlight is young Scot Aiden Moffat’s maiden Dunlop MSA British Touring Car Championship victory, back at Donington Park last April.

Moffat lined up fourth on the grid ahead of Round 4 and a strong start saw him launch into Redgate right with the lead trio – Handy Motorsport man Rob Austin, Eurotech Racing’s Jack Goff, and Tom Ingram in the Speedworks Motorsport Toyota.

After a flying first lap, the Laser Tools Racing Mercedes-Benz had made it into third spot, Moffat slicing his way beyond Goff and homing right onto the back of Austin’s Toyota Avensis. On lap two, a smart move into the Old Hairpin saw him propel the A-Class up into second and from there, he went about hounding early leader Tom Ingram.

The Speedworks racer had made the early jump on pole-sitter Austin but once Moffat had cleared the pair ahead of him, he wouldn’t let the leader out of his sight and a dramatic to-and-fro ensued.

For three laps, the duo were locked in battle and Moffat’s moment would come on lap five – the Mercedes getting the run on Ingram’s Toyota down through the Craner Curves and from there, the Scot never looked back. Laser Tools Racing and Moffat enjoyed their highest-place championship finish to date last year, with Aiden going on to notch another victory at the Brands Hatch finale weekend.

After his maiden win, Aiden spoke of his delight: “It was a very special feeling – I won’t be forgetting that moment anytime soon!

“The Laser Tools Racing car was absolutely brilliant. We had a great set-up all weekend, so I was feeling confident and knew we had the pace. It all came together nicely.