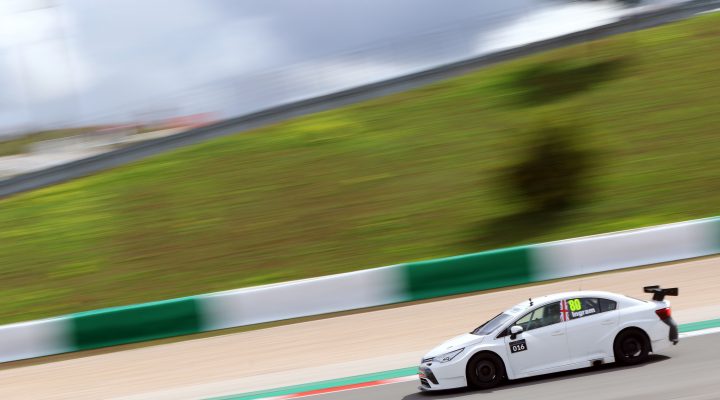 Speedworks Motorsport has just returned from Portugal’s Algarve and Portimao, having spent four days in sunnier climes to evaluate and continue development of its title-winning Toyota as it seeks to go one better with overall honours in 2018.

Last season was by far and away a best-yet for the Independent outfit and longstanding driver Tom Ingram, who secured four victories and a further five podiums on the way to third in the Drivers’ standings and a storming run to both Indy titles.

Ingram was delighted to be in amongst it once again and pushing the boundaries of Speedworks’ already-menacing Avensis at the Algarve International Circuit.

“It was so good to be back in the car!” said Ingram. “It’s been a long winter but I’ve been keeping fresh on the Speedworks Pro-Sim simulator, so when I jumped in the car I didn’t feel rusty at all and was able to get bang on pace straight away.

“Once again, Speedworks have found even more performance in the Toyota and the car feels strong.

“Arguably, 2018 is going to be one of the most competitive in recent years and this test should have given us a bit of an advantage heading into the first round.

“You look down the entry list for this year and there are 10-15 drivers who have won a BTCC race, or are capable of winning one this year, so I am going to have my work cut out but the car is mega and I feel fresh and race ready so bring it on!”

Christian Dick, Speedworks’ Team Principal, extolled the virtues of testing on foreign soil: “Portugal has become an annual test for us over the past three years and you can clearly see how much effect that has had on our results, going from BTCC points scorers to Independents’ champions.

“People ask what’s the point in going abroad, as we don’t race abroad but you look at the weather back in the UK whilst we were in Portugal, the only thing that would have seen any running was the kettle in the workshop!

“As ever, we are pushing hard developing the Toyota and it was great to see the time and effort put into the car paying off in terms of lap-times and pace.

“There is only one goal in 2018 and that is the overall title. This test has put us firmly on the front foot heading into Brands Hatch.”