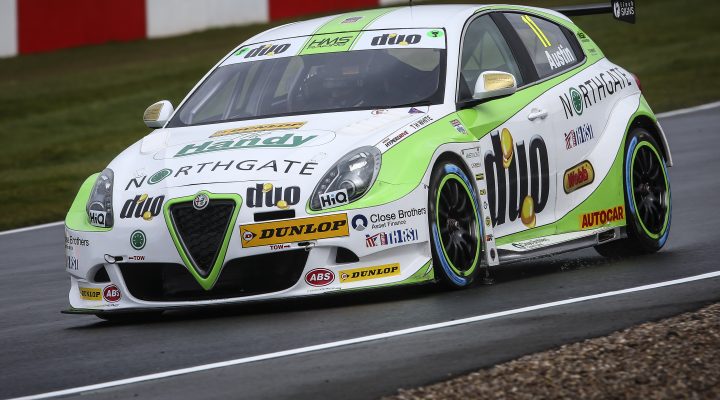 WIX Racing with Eurotech’s Jack Goff led for much of the running, before Austin hit the front during the final hour in his striking DUO Motorsport with HMS Racing car.

Power Maxed TAG Racing’s Josh Cook was sixth fastest as he made his bow in the Vauxhall Astra, whilst Goff had to settle for seventh at the finish. Goff also brought about a premature end to the session when he spun into the gravel at Redgate in the final ten minutes.

Goff wasn’t the only one to suffer, however, as a number of drivers endured wild moments during the four hours of running. Eurotech team-mate Brett Smith had the most notable incident, with his crash at the bottom of the Craner Curves leading to significant damage to his Honda Civic Type R.

Reigning champion Ash Sutton had his maiden run of the year in the Adrian Flux Subaru Racing Levorg and could only manage 20th in the final classification.

The competitiveness and calibre of the field was already on show with the top 16 cars separated by less than a second and a huge number laps completed during the day by the full 32-car line-up.

The opening rounds of the 2018 Dunlop MSA British Touring Car Championship will take place at Brands Hatch on 7/8 April.

Rob Austin said: “There are a lot of common components in a touring car but I underestimated how different driving the Alfa Romeo would be. It’s a lot of work to try and figure out a new car. Trying to get the balance to match up that of the Toyota because we really had that car really nailed down. We are certainly getting there though and we seem to be getting good lap times. I think we are in the ballpark, but we won’t know exactly where we stand until we get to Brands Hatch qualifying – at the moment it’s positive and our tails are in the air! I feel like a broken record as I have been a massive fan of the Alfa Romeo since I was a kid and to finally be getting the opportunity to be representing the brand in the BTCC is a dream.”

Tom Chilton said: “We did a lot of qualifying runs today to really test what the car is like, as that’s what it’s all about on days like this. It is fantastic news right now, but I won’t get too excited until I have got to Brands Hatch. The RS is mega! The chassis is a lot better and the aerodynamics are a lot better, which is obviously one of the main difference between the ST and the RS. Last year was a bit of a tester for me having had a five-year break from the championship so this year I would love to be champion! There are 31 other guys that want to be champion though, and everyone knows this is toughest champion in the world.”

Colin Turkington said: “I felt it went very well today. We’ve definitely improved the car from the start of the session to the end. Donington Park for the BMW has never been our strongest circuit. We bring the car here and you always have to work a little bit harder to get it in the sweet spot. This is our only chance to explore some other avenues and maybe take some risks in terms of setup. Once the racing starts, you don’t have time to push the car too far away from a good base setting. Where we are pace wise, I’m confident, though you can’t read anything into today. Everybody else is in the same position, though.”