Austin: ‘The Alfa’s the best package I’ve started a season with’ 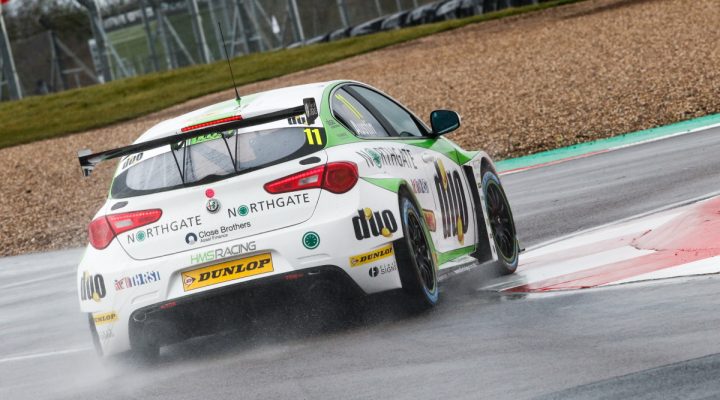 Rob Austin got 2018 off to a dream start in his new Alfa Romeo at the official Dunlop MSA British Touring Car Championship Season Launch test at Donington Park yesterday and feels Duo Motorsport with HMS Racing are in the best possible position heading to Brands Hatch, 7/8 April.

The Evesham racer was able to deliver two laps which would have been good enough to end the day fastest of all, with the best 0.164s clear of his nearest challenger – 1m10.074s the day’s benchmark time.

“It was a very good, very positive day and we were quick, but we’ve got to be realistic as none of us know exactly where we are – we’ll only find that out after qualifying at the first round”, said Austin, “We know other teams haven’t shown their true hand yet, but neither have we and there’s still much more to do. Our Alfa is only three running days old, so there’s a lot of development to come.

“Although there are a lot of common components shared by the Alfa and the Toyota we ran last year, the cars are very different and it has taken a bit more work than I anticipated initially. With all that said, though, it’s always positive to top the times in the pre-season test so we’re delighted.”

This was the first wet-weather running for the Alfa Romeo and so the laps completed early on provided essential data for the team ahead of the opening event of the 2018 season.

As the track dried during the afternoon, lap times duly improved and Austin comfortably ran in the top four. Into the final hour, he moved the number 11 car to the top of the timesheets and while very pleased with the outcome, Austin and the team are remaining steadfastly level-headed.

“Everybody wants to win, it’s no different for us and hasn’t been any different for me in 27 years of racing – we’ll be going to Brands looking to do the absolute best we can”, Austin added, “Realistically we don’t know what everyone else is doing, but we’re just going to concentrate on our job, focus on what we need to do and then see where we are at the first round.

“As I’ve said, we know others have more in the bag but so do we, so we’re in a good place as things stand. What I will say, this Duo Motorsport with HMS Alfa Romeo is the best package I’ve ever started a season with, so we’re definitely feeling confident for the new season.”