Speedworks pin BTCC title tilt on ‘evolution rather than revolution’ 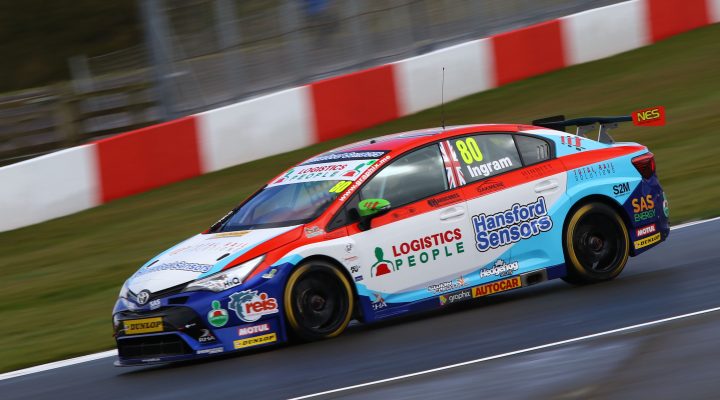 Following four days on-track at Portimão in Portugal’s Algarve region, Speedworks returned to the UK for the BTCC’s traditional Season Launch at Donington Park in Leicestershire – the first opportunity for media and fans to grab a glimpse of the striking new livery adorning the number 80 car.

Once the covers had been removed, 24-year-old Ingram took to the circuit alongside his 31 high-calibre rivals in the first and only group test before the serious business gets underway in the opening round of the campaign at Brands Hatch on 7/8 April.

With early rain soon making way for sunnier skies, testing produced enough for ninth in the overall pecking order, but he’s quite content to keep his powder dry until the talking stops just over a week from now.

“You can never read too much into the lap times at Season Launch, because different people are running different programmes and varying levels of ballast, so we simply focussed on ourselves and in that respect, it was a very successful and satisfying day,” Ingram said.

“Everything went according to plan, and we put a decent number of laps on the board. Right from the outset, the Avensis felt really strong – and that gives us a lot of confidence heading to Brands Hatch, where the aim will be to come away with a very solid clutch of points. Consistency is what the BTCC is all about, and last year, we proved that is something we have added to our armoury.

“Donington was also the first time we got to take a closer look at the opposition, and there’s no question that the BTCC is going to be as tough as ever this year – if not even tougher. The top guys will remain formidable competitors, and when you throw into the mix a number of new drivers and new cars, it really becomes extremely difficult to call. Ultimately, all we can do is perform to the best of our ability every time we take to the track, with our sights solidly set on lifting the biggest prize of all.”

Indeed, after clinching both Drivers’ and Teams’ honours in the BTCC’s Independents’ Trophy in 2017, Ingram and Speedworks’ goalposts have shifted as the forthcoming campaign races into view, with the most coveted crown in British motorsport the undisputed target for 2018. Team Principal Christian Dick reveals that pre-season preparations have laid the foundations for plenty of quiet optimism.

“The mood inside the camp is very positive,” he said. “We knew we had a very good base from what we were able to achieve last year, so we didn’t make any major changes to the Avensis over the winter – what is it they say, if it ain’t broke, don’t fix it. It was far more about fine-tuning what is already quite evidently a very competitive package – evolution rather than revolution.

“The attention to detail that has gone into the build and presentation by the whole Speedworks crew is phenomenal, and we’re really pleased with the final look of the car. It was fantastic to be able to show it off at last to the watching world at Donington, especially in front of so many of our loyal partners and supporters.

“Just like in Portugal, the pace was very encouraging, and just like in Portugal, we encountered mixed weather. Ideally, you always want to run in the dry during testing, but it did give us the opportunity to work on our wet set-up and it’s fair to say we feel confident in all conditions.

“Considering the programme we were following at Donington and the weight we were carrying inside the Avensis, we were very happy with our performance again. We spent most of the time working on race scenarios, although we were building up towards one final push right at the end when the red flags flew and the session didn’t restart. That robbed us of the opportunity to move up the order, but I have no doubt many other drivers and teams have a similar story to tell.

“Going to Brands Hatch, our focus is firmly on the bigger picture. We are aiming for the outright championship this year, and we are clearly in the best position we have ever been to challenge for that title. We have a quick car in all situations, pedalled by a quick driver behind the wheel. We need to make sure we score strong points throughout and grab podiums and wins when they are there for the taking – that’s the battle plan.”