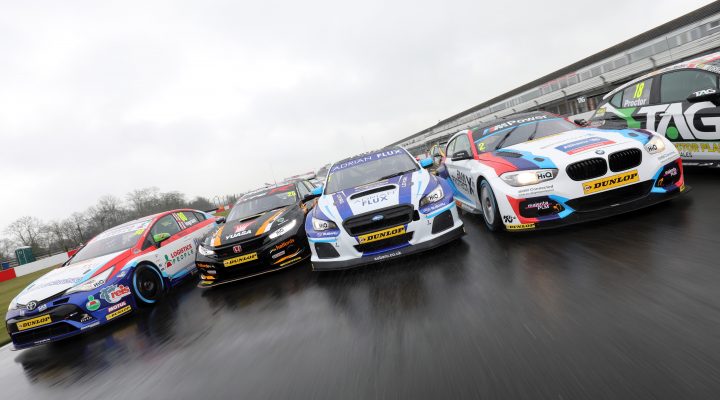 The Dunlop MSA British Touring Car Championship’s 60th anniversary campaign is set to spark into life next weekend (7/8 April) at Brands Hatch, with arguably the most decorated line-up in its history, as an unparalleled 17 race-winners, and five champions, prepare themselves to battle for the most coveted prize in British motorsport.

A capacity grid, comprising 32 of the very best in touring car talent anywhere in the world will take to the track around the 1.2-mile Indy circuit in front of a packed crowd of passionate fans keen to catch a glimpse of the stars and their cars on the first outing in anger of 2018.

The famous Kent venue played host to a nail-biting title showdown at the end of 2017 between the young pretender, Subaru’s Ashley Sutton and the experienced double-champion, BMW’s Colin Turkington. Sutton, then competing in just his second BTCC season, held his nerve to clinch the crown – adding his name to the record books to become a major part of the championship’s storied, 60-year history. Retaining the title is another proposition entirely, however, with competition truly more fierce than it has ever been before.

For 2018, the BTCC will again comprise of 30 rounds across ten race weekends at nine different venues around the UK. As part of the championship’s Diamond Jubilee celebrations, in addition to special events at the Silverstone Classic, Goodwood Festival of Speed and more, there will be a special one-off event at Snetterton (28/29 July) – the Diamond Double – a 60-mile, clean-slate race without success ballast and with double the championship points up for grabs.

All of the action will be played out in front of an ever-increasing trackside audience numbering hundreds of thousands over the course of the season, with millions more watching live and free-to-air via the championship’s longstanding broadcast partners ITV. The action saw fantastic television viewing figures in 2017, with fans tuning in to ITV4, the ITV Hub and itv.com/btcc, as well as extensive highlights programmes to keep track of every detail between Round 1 and Round 30.

Factory backing
Four manufacturers will take to the grid in 2018, with BMW, Honda, Vauxhall and Subaru all staking their claim for glory. On its return to the BTCC last year, Bavarian giants BMW aligned with decorated constructors West Surrey Racing to run a trio of 125i M Sports and this will once again be the case in 2018. Its comeback was marked in the best possible style as it took both the Manufacturers’ and Teams’ championships – two trophies adorned with BMW Motorsport ribbons to take back to the marque’s UK headquarters.

Subaru is a relative newbie to the UK’s premier tin-top tour. It joined the ranks in 2016 and immediately set fear into its more established rivals with a number of victories, searing pace and a push for championship silverware. A year later and it counts the BTCC Drivers’ Championship to its name thanks to the efforts of hot-shot Ashley Sutton – himself taking the honours in what was also just his second year. The Essex racer set the pace for much of 2017 and he’s sure to be right there come the end of 2018, too. Alongside him in the second Adrian Flux Subaru Racing Levorg is record race-winner Jason Plato. Since his debut in 1997, he’s been right at the sharp end though it wasn’t to be the case for 2017. He’ll be aiming to bounce back at Brands Hatch in a little over a week’s time and beyond. Youngster Josh Price will drive the third Levorg, under the Autoglym Academy Racing banner.

Colin Turkington and Rob Collard return in the famous blue, red and white of the German automaker, forming Team BMW. The former came oh-so-close to sealing the Drivers’ title in the final round last year, though contact put paid to his late effort and handed Sutton the initiative as well as the overall laurels. The double champion has taken the off-season to reset and both he and the team are sure they’re in the best possible place to challenge once more for the top prize.

Rob Collard was also in contention toward the top of the standings over the course of the season, though his participation was curtailed after a heavy impact in an accident at Silverstone, prematurely ending any potential run for top spot in the tally. The pair will once again be joined by Andrew Jordan in the BMW Pirtek Racing 1 Series – a man seeking to make use of the continuity of remaining with the same outfit for a second consecutive campaign, and build on what was his first season in rear-wheel drive machinery. Brands Hatch Indy was a happy hunting ground for him in 2017 as he started with a victory at the opening race weekend this time last year.

Honda is the most successful marque in the history of the championship in terms of races won and in Matt Neal, it has one of the most successful drivers in its midst, too. Triple champion Neal’s three-decade career at the top of British saloon car racing has sealed his legacy but he’s as hungry as ever to add a record-equalling fourth Drivers’ trophy to his collection. He’s joined for 2018 by multiple sportscar champion Dan Cammish. The Yorkshireman has big boots to fill – those of outgoing three-time champ Gordon Shedden as he has moved onto pastures new over the winter. The debutant’s credentials speak for themselves, however, and early signs indicate he’ll be hitting the ground running. For 2018, the Team Dynamics-run outfit have switched to the latest generation Honda Civic Type R, the FK8. It’s sure to be right at the sharp end come lights out at Brands Hatch.

Power Maxed TAG Racing welcome Josh Cook into the fold and the Vauxhall squad is hoping to push on after a strong debut campaign for the Astra last year, whereby Cook’s new team-mate Senna Proctor sealed the Jack Sears Trophy.

Indie lights
Speedworks Motorsport is aiming even higher in 2018 after an incredibly successful effort all-round last year. The plucky family-run squad, with Tom Ingram behind the wheel of its Toyota, took the fight to all of the factory-backed runners with a bundle of race wins propelling them to an overall title challenge, as well as the Independent Teams’ and Drivers’ titles – some achievement for a one-car team in what is one of the most competitive series’ in the world. Were it not for a mid-season dip, eventual champion Sutton would have been looking even more closely in his mirrors for Ingram’s Avensis come the finale weekend. Ingram’s no stranger to the top step at Brands either, winning on the Indy loop in each of the last two years.

WIX Racing with Eurotech will be looking to build on a strong 2017, with a duo of race wins for Jack Goff an indicator of the promise inherent within the squad’s potent Honda Civic Type R. Brett Smith also makes a return, after impressing following his debut at the half-way stage last year. For 2018, Matt Simpson’s Simpson Racing is being operated under the Eurotech banner, making it a trio of Type Rs in the stable.

Motorbase will be aiming to trump third in the standings with James Cole, Tom Chilton and series returnee, 2016 runner-up Sam Tordoff completing its line-up of three upgraded Ford Focus RS’. BTC Norlin Racing has switched to proven title-winning machinery in a pair of Honda Civic Type Rs for 2018 and it will be hoping to build on an excellent opening campaign – fourth in the Independents’ running. Chris Smiley is joined by James Nash in the stunning battleship grey Hondas.

Ciceley Motorsport welcomes Tom Oliphant, who partners long-time Ciceley racer Adam Morgan, with the Lancashire outfit expanding to two Mercedes-Benz A Class under its banner, with another in Laser Tools Racing’s Aiden Moffat – now a double race winner in the championship.

The Alfa Romeo badge makes a welcome return to the BTCC with Rob Austin and DUO Motorsport with HMS Racing. The Evesham racer topped the charts at the Season Launch test and is sure that the Giulietta has given him and the team their best baseline yet heading into Brands Hatch – the sky appears to be the limit for the much-loved Italian marque’s first outing since the turn of the millennium.

AmD added two MG6’s to its stable over the off-season, to be piloted by race-winner and another familiar face in Tom Boardman. Alongside him will be Rory Butcher, while Ollie Jackson returns alongside newcomer Sam Smelt in the squad’s trademark Audi S3 Saloons. Team HARD, meanwhile, has impressively added a fourth Volkswagen to its effort with Jake Hill, Michael Caine, Bobby Thompson and Mike Bushell now all under its roof. Stephen Jelley returns with Team Parker Racing, though he now helms a BMW 125i M Sport in a striking red, white and blue livery.

The all-new Alfa Romeo Giulietta made its competitive debut at Donington and was immediately quick out of the blocks, seeing off the challenges from Tom Chilton’s Ford and Colin Turkington’s BMW.

“I think we are in the ballpark, but we won’t know exactly where we stand until we get to Brands Hatch qualifying – at the moment it’s positive and our tails are in the air!” said Austin. “I feel like a broken record as I have been a massive fan of the Alfa Romeo since I was a kid and to finally be getting the opportunity to be representing the brand in the BTCC is a dream.”

Halfords Yuasa Racing hit back at Brands Hatch with the experienced Matt Neal heading home new team-mate Dan Cammish on the timesheets. Jack Goff made it a Honda 1-2-3 in the Independently run Eurotech Civic Type R.

“It’s been a titanic effort from all the boys, with no shortage of midnight oil burned recently and the new Civic Type R is an absolute work of art,” said Neal. “The strength-in-depth up and down the grid looks to be as impressive as ever, though it’s impossible to know what hand everybody is showing at this stage of proceedings – it’s always a great game of poker pre-season – and we definitely still have a little bit extra in our pocket.

“Brands Hatch’s Indy Circuit has traditionally been a happy hunting ground for me and the target for the weekend has to be the podium, although if we could grab a win first time out with the new car, that would obviously be amazing.”

We evolve, we don’t … revolve
For 2018, TOCA has enacted a handful of tweaks to the rulebook. Most notably, driving standards penalties will be increased, the reverse grid draw will be from positions 6-12, Jack Sears Trophy eligibility will be for those yet to score an outright podium and the number of permitted driver changes in a season has been doubled from one to two.

A full rundown can be found in the 2018 Sporting and Technical Regulations.

Timetable and tickets
The opening race weekend of the 2018 Dunlop MSA British Touring Car Championship begins on Saturday 7 April, with the entire race day on Sunday 8 April broadcast live and in high definition on ITV4. Those in attendance at the circuit can stay in touch with the commentary and live timing from every session, available at btcc.net/live over the whole weekend.

In addition to the BTCC, the support series on the TOCA package are set to deliver even more action to the fans at Brands Hatch. Sportscar fans will get their fix with races from the Michelin Ginetta GT4 Supercup, Porsche Carrera Cup GB and the Ginetta Junior Championship. The Renault UK Clio Cup, often seen as a stepping-stone to reaching the BTCC, will also feature on the huge bill of British racing, as will the F4 British Championship.

Tickets for the Dunlop MSA British Touring Car Championship season-opener at Brands Hatch (7-8 April) are available from £28 for adults, with free entry for children aged 13 and under. For more information call 0843 453 9000 or visit www.brandshatch.co.uk. All admission includes access to Sunday’s autograph session with the BTCC drivers in the pit lane, as well as free parking.