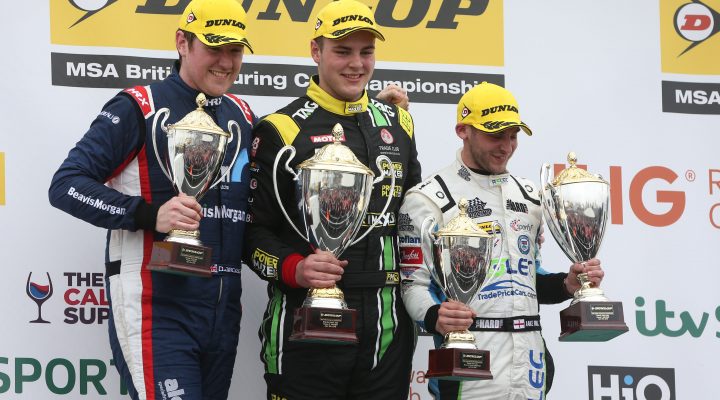 Round 2 of the 2018 Dunlop MSA British Touring Car Championship threw up a fantastic spectacle, with a trio of drivers making their maiden visit to the rostrum.

Power Maxed TAG Racing’s Senna Proctor took the race win, and he was joined by Trade Price Cars with Brisky Racing’s Jake Hill and AmD with Cobra Exhausts’ Ollie Jackson on the podium. All three rolled the dice, gambling on Dunlop SportMaxx dries when more than two-thirds of the field elected to start on BluResponse wets in mixed conditions. It proved to be the prudent choice, with the track surface coming to those on slicks later in the race.

“On the grid for race two, my Team Manager and I said over the radio ‘on three shout which tyres to go for’ and we both shouted slicks,” said Hill. “From 25th on the grid we didn’t have much to lose and very quickly I realised we had made the right choice”

By lap 11, Hill had set the fastest lap of the race and the tide turned towards the gamblers. He and team-mate Bushell traded fastest laps and made quick progress. Aiden Moffat in the Laser Tools Mercedes-Benz was the one catching the eye right off the bat, overcoming a major moment to take the race lead before hitting the tyre barriers at Druids after contact.

This left the door open for Proctor, with Hill and Jackson also scurrying through – as did the AmD MG of BTCC returnee Tom Boardman, then taking fourth position.

“Oh my word that was crazy!” added Hill. “The car was mega, I had a look at passing both Proctor and Moffat but they were so defensive so it wasn’t worth the risk.

“I am beyond happy! I am so, so grateful to so many people who have helped me get to this point – obviously the legendary Tony Gilham and the boys at Team HARD, especially Geoff (Kingston) and Jamie, Josh, Carl, Nathan and Gary – the engineers who have been working on my car – as well as my amazing supporters.

“I have to say, I would not be racing in anything – let alone BTCC – without their help.

“I’m worried I will forget anyone – but my 2018 partners Rolec Racing, Trade Price Cars, the awesome Richard Wheeler from Brisky Racing, Ecoflam, Danfoss, Bill Rawles Classic Cars, AWS Appliance Spares, Scoria Tech, Zynth, Jakob Ebrey Photography, Spine Optics, P1 Nutrition, Tech Max Pro Gear, Torq, the BRDC. There’s one person who has been with me since the beginning, from Ginetta Juniors in 2010 to today and has never, ever let me down is John Miskin from Sportif Motor Group.”

AmD with Cobra Exhausts’ Jackson was equally over the moon. He was also one of those to gamble ahead of race two, so, early on, he slipped back down the order. As circuit conditions improved, though, he started to rapidly climb through the field. From 21st at the end of lap twelve, Jackson had raced his way into the top eight and continued to pick off the drivers ahead to run in a four-car train battling for the lead with three laps to go, eventually storming to third place and securing a maiden BTCC podium – a first for the Audi S3 Saloon and the team’s first since Knockhill in 2014.

“It’s been an emotional weekend,” said Jackson. “We’ve worked so hard as a team to improve the Audi and have been getting quicker and quicker, and today we’ve been able to fight for strong results across all three races.

“Race one was perhaps the race of the day to be honest and to come from where we where on the grid to finish twelfth was really good and helped to set up the result in race two.

“We knew it was a gamble to go with slicks but also knew that the circuit was only going to get drier and it proved to be the right call. The car was absolutely fantastic and to bring home a podium was beyond our expectations coming into the weekend.

“Even with the success ballast onboard for race three, we could well have had a top five finish had we not been hit off track a few times, which also cost us the Jack Sears Trophy this weekend.

“However, I can’t go away from a weekend where I’ve taken my first podium feeling disappointed and I think we have shown this weekend that we deserve to be taken seriously in this series and aren’t just here to make up the numbers. We have to now try to build on this and fight for regular points as the season goes on.”