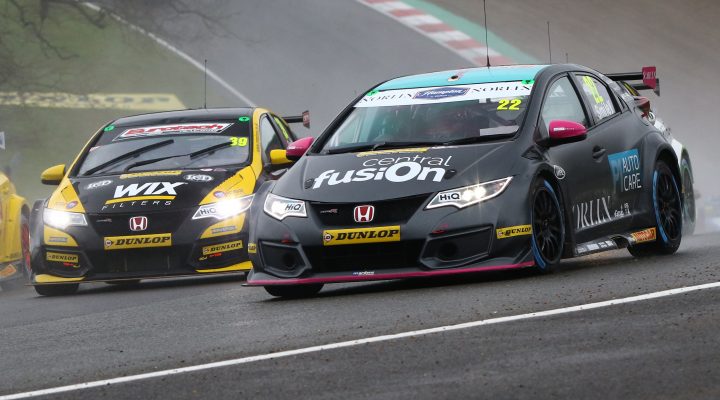 BTC Norlin Racing made good progress at Brands Hatch as it starts life with a newly-aquired pair of Honda Civic Type Rs but the team are hungry for more next time around.

Qualifying proved frustrating, with Chris Smiley and James Nash lining up 16th and 26th respectively but the outfit were confident of their ability to make progress come raceday. Duly, after an early safety car period, the two were up to tenth and 17th come the chequered flag in the opener – some typically touring car scrapping doing the business. Having briefly caught Team Boss Bert Taylor prior to the weekend’s action getting underway, he would be satisfied with that as a start for what are two freshly-built Hondas.

The debate over tyre choice was the talk of the grid prior to race two, with Norlin electing to run wets. With the Dunlop Sportmaxx shod runners flying on the drying track, Smiley and Nash battled as high as sixth and seventh respectively before the BluResponse wets started to suffer. Nash would bring his Type R home in 14th – more points for the team and his first of the season, while Smiley took the chequered flag 17th. Race three yielded 16th for Smiley, though terminal damage put paid to Nash’s efforts.

“It’s unbelievable to finish in the top ten at the opening race of the season,” said Smiley. “This was my aim for the day and I’m delighted to have made up six positions.”

“The rest of the day was frustrating, running sixth for much of race two, until the track dried and we were caught on the wrong tyre. Race three looked as though ninth was possible, until I was caught up in someone else’s incident at Druids on the last lap, but that is touring car racing.

“I can’t wait to get to Donington Park with the awesome guys and girls from BTC Norlin Racing.”

“For various reasons we were only able to do minimal running before this weekend and so today has been pretty much a very public test session for us,” said an optimistic Nash.

“The most important thing is that we’ve sorted the handling problem that had handicapped us through qualifying and the opening race. I’m confident we’ll do well at Donington Park.”

Winter has been flat out for Bert Taylor’s outfit, now into the second year of its BTCC return, having put together a pair of new cars and welcoming aboard several key partners including The Range and Hampton by Hilton.

“As a minimum this weekend, we wanted to have both cars within the top 15 during the three races,” said Team Manager Bert Taylor.

“Whilst we didn’t quite get the results that we wanted, we have seen that we are comfortable racing towards the front and have shown that we have the tools to get the job done this season.”

“We wanted to be leaving the circuit with a better haul of points, but we’re happy that we have understood the cars better and moved closer during each race to where we know we should be.

“We’re now focusing on Donington Park, so expect more passion and determination than ever before from BTC Norlin Racing, we want more!”