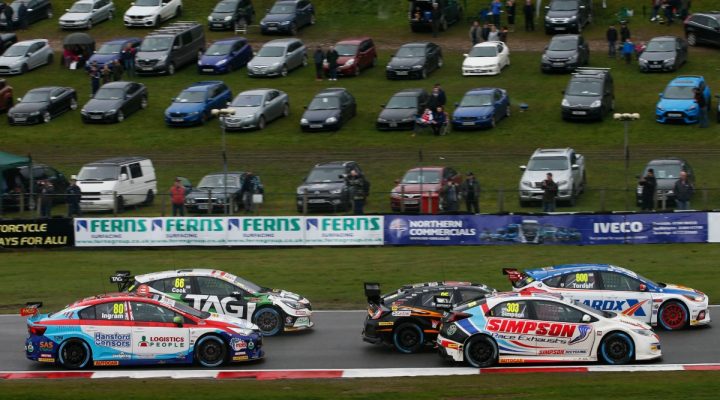 Simpson Racing now sits inside the WIX Racing with Eurotech stable, with Jeff Smith’s outfit now running a third Honda Civic Type R. Simpson feels everything has fallen into place nicely for him this off-season, and his results over the Brands weekend – a pair of highest-ever seventh place finishes – have only bolstered his optimism.

“We set ourselves a goal this year with the new team at Eurotech to try and qualify and finish in the top ten positions over the course of the season,” said Simpson. “Obviously, that wasn’t necessarily expected to be the case right from the off at Brands Hatch but it was a fantastic weekend.

“I was some six-tenths quicker in the car in places over the off-season than through last year, and around Brands Hatch in practice, I was quicker than I ever had been there before. In qualifying I tend to over-drive and that tends to make you slower but we managed eighth, which was a strong starting point.

“It was a shame about the first race really. I was in the right place at the right time around the outside of Tom Chilton and Sam Tordoff but contact unfortunately ended the chance of what I think could have been a top five finish – my wet pace has been really good.”

Yesterday, at the TOCA Support Test, Simpson toured Thruxton Circuit for the first time in a Eurotech-engineered Honda. The learning process, for him, continues in what he sees as the perfect environment with buckets of support from his stablemates as well as his engineers.

“I’d never driven the Eurotech-engineered Honda around Thruxton before, so I was a little apprehensive and didn’t know how the car might feel,” he continued. “I got my eye in though and it was a productive day with setup changes and some good things learned.

“Every team sets the car up in different ways, so although it’s the same package, the engineering and setup side of things has been a dramatic change.

“I really feel at home with these guys and I’m brimming with confidence. I get on with my engineer Richard Owen really well, he’s been great, so hopefully we can push on, try and improve and set ourselves some new goals.

“I’m learning a lot from Jack (Goff) and Brett (Smith) as well as Jeff (Smith) with all of his experience. We have debriefs together and we’re all as one. It’s great – they’ve definitely got this Civic ticking, that’s for sure.

As far as Donington Park is concerned, Simpson wants to build some momentum, and carry on where he left off in Kent.

“Media day was really good at Donington Park in the damp conditions but I didn’t get a new tyre run when it dried out in the afternoon.

“I’m hoping for more of the same – just to keep building on my confidence and get myself some more top ten finishes. Hopefully then, the rest will fall into place. It’d be nice to come into Thruxton with a bit of ballast on-board, you never know! That would be mega.”