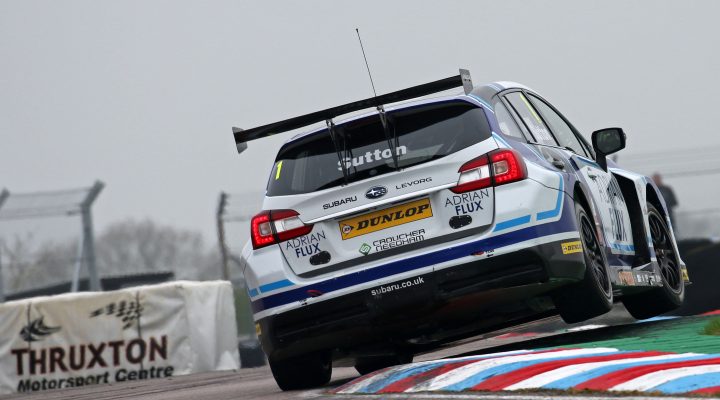 Thruxton welcomed the Dunlop MSA British Touring Car Championship to Hampshire yesterday as the majority of the grid took the opportunity to rack up the miles ahead of their competitive return to the UK’s fastest race circuit, 19-20 May.

The BTCC celebrates its 60th, Diamond Jubilee, anniversary this year and the country’s premier motor racing series has already shown signs that it will be another vintage, and fiercely competitive campaign after a storming opening race weekend at Brands Hatch – with nine different drivers making the podium, three different winners and 10 marques represented in the standings’ top ten.

Thruxton itself celebrates its 50thAnniversary, and the beloved circuit, affectionately referred to as the Hampshire Speedbowl, always yields an unparalleled weekend’s action. Its flat-out characteristics are so unique that TOCA runs an annual test-day for the BTCC and its support series – Renault UK Clio Cup, the Ginetta championships and the F4 British Championship – ensuring all involved are up to speed ahead of their return in five weeks’ time.

Twenty-five of the BTCC’s finest drivers jumped at the chance to rack up the laps (over 1,100 in all on the day), among those, incumbent champion Ashley Sutton (Adrian Flux Subaru Racing) and his team-mate – BTCC legend Jason Plato, Halfords Yuasa Racing’s triple title-winner Matt Neal and Dan Cammish, plus past champs Colin Turkington and Andrew Jordan in the West Surrey Racing BMWs.

At the end of the day it was Sutton atop the timesheets, commenting later that evening that his heart rate had finally returned to normal levels after the high-speed Hampshire test!

“That was unexpected, I’ll be honest,” said Sutton. “It’s been a fast day in general and everyone’s been quick. We’ve come here looking for track time and I think we’ve found a few key things. It’s been a general test, not just a Thruxton test.

“We hadn’t done mileage prior to Season Launch at Donington Park, then Brands Hatch later that week but that was rained off. We’ve come to make up time on the others and we’ve achieved some key things and we hope some of those will carry over to Donington.”

Between the two sessions, eight drivers ran inside 2017’s BTCC qualifying lap record time set by the Honda Civic Type R of Matt Neal, so all signs are pointing to a fastest-ever race weekend come May.

Parts of Thruxton’s stunning new £2 million state-of-the-art hospitality facility, The Thruxton Centre, will be open for business by the time the BTCC makes its entry ahead of an official opening at 12:00 midday on Sunday 3 June amid a weekend of 50thAnniversary celebrations. Highlights there include 15 special races as well as high-speed demonstrations from Williams’ 1983 FW08C and other iconic racing cars and bikes. There will be appearances, too, from a number of high-profile guests including Murray Walker and Nigel Mansell.

“It’s always a delight to welcome Britain’s biggest championship on four wheels back to Thruxton,” said Thruxton Group Managing Director, Bill Coombs. “It’s a series that continually produces a fantastic weekend’s racing, with 32 cars and some of the best tin-top protagonists around throwing up a real treat. The test yesterday gave us a little glimpse of what’s to come – it’s going to be a quick one this year, that’s for sure.

“Having had a keen eye on its opening race weekend a fortnight ago, it looks like it’ll be an even more fascinating prospect around the quick stuff here come May. I wouldn’t dare try and pick a winner!

“The track itself is a favourite of many of the drivers, it’s a fast and flowing test of balance, bravery and poise plus a healthy dollop of slipstreaming!

“For 2018, in our 50thAnniversary year, we’re extremely proud to be able to open The Thruxton Centre – our brand-new, top-of-the-line facility comprises a restaurant and bar, exhibition spaces, function rooms, hosting and hospitality suites and a spectacular viewing terrace.

“Parts of the centre will be open for use at the BTCC race weekend but its official opening takes place over the weekend of 2/3 June – as part of a special meeting commemorating our golden anniversary.”

Advance tickets for the BTCC’s visit, 19-20 May, are available from £12, with weekend passes with paddock access running to just £40. Saturday grandstand seats are an additional £5. Accompanied children aged 15 and under will be admitted free of charge.