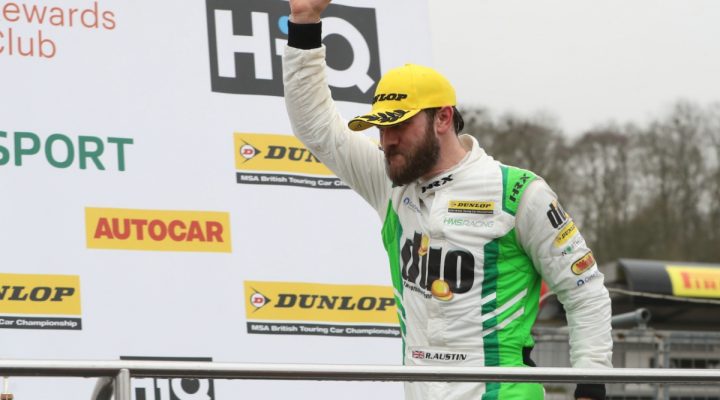 Rob Austin steered his brand-new DUO Motorsport with HMS Racing Alfa Romeo Giulietta to a podium finish on the opening weekend of the Dunlop MSA British Touring Car Championship back at Brands Hatch, sealing third spot in Round 3.

Added to a storming sixth place finish, from 29th on the grid, in the preceding wet-but-drying race where an inspired gamble on slick Dunlop tyres paid dividends, the Evesham racer departed Kent fourth in the outright BTCC championship standings.

Marking a strong start to life in the BTCC for the team’s Alfa Romeo, the result at the 1.2-mile Indy Circuit sparked emotional celebrations with Austin dedicating the performance to the memory of late team mechanic Shane Stokes.

“It’s for Shane,” said an emotional Austin immediately after the final race, “It’s very mixed emotions to be here [on the podium], we miss him a lot – a lot – and this is for him. He’s looking over us and gave us that luck in race two with the reverse grid draw.

“We didn’t have the front tyres to win it, this is the first time we’ve put soft tyres on it, so we’ve still got a huge amount to learn with this car but it’ll come. It’s a great base car, the engineering that’s gone into this is the best I’ve seen on this grid.”

“We just need to figure out how to get it to work, we need a couple of test days and a bit of development to do that. We’ve got great support from DUO, Northgate, Close Brothers, and with their help I’m sure we’ll get it there.”

“The early laps in race two were very difficult on slicks,” explained Austin, “When I saw [Senna] Proctor and [Matt] Simpson go past me I wondered what was going on as I knew they were on slicks as well, but I didn’t realise they were on the soft slicks so they were massively beneficial in those conditions. The Alfa did a good job and I was just gutted I ran out of cars to overtake – it was very enjoyable!”

Reflecting on an impressive start to 2018, DUO Motorsport with HMS Racing Team Principal Simon Belcher said: “I’m obviously super proud of the whole team, everyone has done an incredible job with the Alfa and there have been a lot of late nights to get us to this position – and this is only the start.

“To see Rob on the podium on our first weekend with a brand new car, which only had three days of running prior to coming to Brands, is more than we could have dreamed of. Obviously, we’re all thinking of Shane (Stokes) this weekend who is so dearly missed by everyone at the team. This result is for him, he’ll always be a massive part of whatever DUO Motorsport with HMS Racing achieves.”

Following a successful TOCA Support Test day at Thruxton for the outfit, Austin sounded more than happy with how things are progressing with his new Italian steed and feels there’s far more to come, starting at Donington Park in a week-and-a-half’s time.

“Last year when we came here we had to make a lot of changes to our car to get things balanced out but we’ve got a good baseline here. We’re not there yet with balance yet and it’s very different to the Toyota.

“We’ve not even scratched the surface of the potential in the car yet. To leave Brands with the results we had we were over the moon, fourth in the championship, with a car that’s three days old effectively.

“We thought we may have gone the wrong way a little bit in qualifying but you can’t moan too much about being 0.2s off the pole time and lap record in a car that’s as new as it is. I thought it would be much easier to translate setup from the Toyota to the Alfa Romeo as there are a lot of common components but it’s surprised me how different this car is.

“We were quick at Donington Park at Season Launch, I gel well there too – I’ve always gone well there throughout my career and it just flows. It will be a bit of a learning experience qualifying with ballast on-board. We know we’ll get there though and I feel confident we’ll be winning races this year.”