Cammish on top at Donington Park 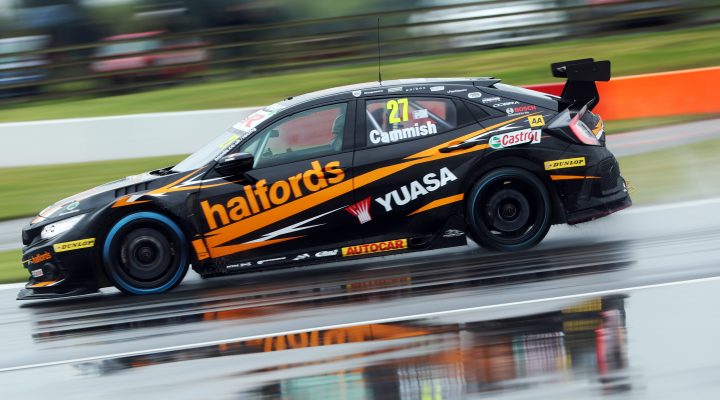 Halfords Yuasa Racing’s Dan Cammish has continued his impressive start to life in the Dunlop MSA British Touring Car Championship by setting the pace in the opening practice session at Donington Park.

The Yorksireman set provisional pole position at Brands Hatch during the first qualifying session of the new season earlier this month, only to lose it all to a pitlane infringement, but he has underlined his pace with an early showing at Donington.

“It’s a big change for me and a very, very steep learning curve in a very short period of time,” said Cammish. “We’ve got the speed there in the car, we just need to refine it. The racing’s very different to what I’m used to – it’s elbows out and all about getting stuck in then seeing where you go from there. The aim over the three races is just to go forward and I’m only going to get stronger – I’m in with a great team.”

Wet conditions meant all 32-cars ran on Dunlop BluResponse wet tyres for the full 40-minute duration and it was the all-new Honda Civic Type R that showed its class around the 1.98-mile circuit.

Power Maxed TAG Racing enjoyed a breakthrough victory with Senna Proctor at Brands Hatch, but this time it’s his team-mate Josh Cook grabbing the early headlines. The former Jack Sears Trophy winner was second fastest here in his Vauxhall Astra, as he pipped the BMW of Andrew Jordan and Subaru of Ash Sutton on the timesheets.

Brett Smith (Eurotech) and Aiden Moffat (Laser Tools Racing) were next up in the order, ahead of James Cole (Motorbase) and Rory Butcher (AmD).

Free Practice Two will take place at 1235 before qualifying commences at 1520, where the action can be viewed live and exclusively via www.itv.com/btcc.