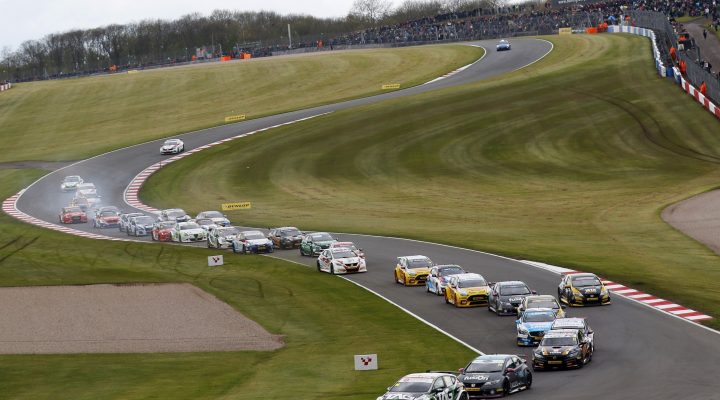 Cook claimed a maiden BTCC victory in the opener – becoming the 19thdriver on the current grid to have won a BTCC race – with a commanding drive from pole position.

The Power Maxed TAG Racing star had to fend off an early charge from fellow front-row starter Chris Smiley, who he briefly lost the lead to through the Craner Curves on the first lap, but the Vauxhall Astra man immediately fought back to retake the advantage.

Cook never looked back as Smiley became the cork in the bottle, having elected to run the harder Dunlop tyre compound in race one. Halfords Yuasa Racing’s Dan Cammish nipped by Smiley, as did Sam Tordoff’s Ford Focus RS and a gaggle of others, but BTC Norlin Racing’s Smiley eventually settled in seventh.

Cammish’s challenge faded as the race drew to a close, leaving Cook to cross the finish line well clear of his rivals.

Race two went the way of championship leader Ingram as the Toyota star muscled his way through the pack from 13thon the grid. Smiley grabbed second – his first ever podium in the BTCC – and Jack Goff took third in his Honda Civic Type R.

It was rookie Cammish that blasted into the lead off the line as his Honda got the better of Cook’s pole-sitting Vauxhall.

As per race one, however, cars running the harder compound struggled to maintain front-running pace and it was soon those on the Dunlop SportMaxx Prime tyre storming through the field.

That list of drivers included both Smiley and Ingram as they ganged up on Cammish at mid-distance, with the Toyota Avensis following the BTC Norlin Honda through. Smiley then ran wide on the exit of Coppice on lap ten, and Ingram eyed his opportunity on the run down to the final chicane. The 25-year-old made his move stick before going on to take his eighth career BTCC victory – also becoming the first double race-winner of 2018.

WIX Racing with Eurotech’s Goff completed the podium, after he too made huge progress from 12th on the grid, while Cammish came home fourth.

Ciceley Motorsport’s Morgan then made his mark with a storming race three success.

Rory Butcher initially held onto his pole position advantage off the line, but reigning champion Ash Sutton and Morgan had nipped by the AmD with AutoAid/RCIB Insurance Racing MG6 before the end of the first lap.

There was drama further behind, which saw Senna Proctor, James Cole, Sam Tordoff, Brett Smith and Josh Price tumble out of the race. The multi-car collision left several machines stricken all over the track, and a safety car was subsequently called.

The all-important challenge for the lead came on lap eight as Morgan scythed his way past Sutton’s Adrian Flux Subaru Racing Levorg at the final chicane, with the latter immediately falling into the clutches of the chasing pack.

When the dust settled, it was Morgan who claimed victory from a charging Cook, whilst Moffat made it two Mercedes’ on the podium for the first time.

Team BMW’s Rob Collard claimed fourth from his fired-up stablemate Andrew Jordan, after the BMW Pirtek Racing man surged through from 18th on the grid.

With another exciting day of racing in the BTCC over, it is Ingram leading the Drivers’ standings by seven points from Morgan, with Cook a further eight in arrears.

Ingram and Speedworks Motorsport hold the advantage in the Independents’ categories, whilst Cammish currently leads the Jack Sears Trophy.

Jake Hill is P1 in Dunlop’s #ForeverForward standings, having made the most passes so far this season. The Kent driver was at it again today with his top ten finish in the final race being a particular highlight.

The Dunlop MSA British Touring Car Championship returns for rounds 7, 8 and 9 at Thruxton in three weeks’ time (19/20 May).

Josh Cook said: “It’s a little bit easier starting from the front, that’s for sure! I’m over the moon for the guys and everyone who’s put all the hard work in. Senna (Proctor) got his last weekend and I needed mine. We were quick yesterday and I had to battle for the lead. I’m really glad to have brought it home and hopefully it’s the first of many! We’ve always had strong pace over the years but there’s been a bit of bad luck perhaps. We’ve worked so hard over the winter to make sure we’ve nailed our qualifying setup and the Vauxhall’s an amazing drive now – the best car I’ve driven out of the box and every thanks to my engineers for it!”

Tom Ingram said: “That was absolutely crazy! It was very similar to the one back at Brands Hatch and the car was just so hooked up. It’s just incredible without the weight. I was really confident heading into the race, as I was losing that ballast. Spirits were high and we had the confidence in the car to make our way through. Chris (Smiley) is driving incredibly well – I knew he’d be a difficult man to pass, but I was delighted to have made the move stick. We really do have one hell of a car here, and it keeps getting better and better! We really struggled in qualifying, but we knew it would come back to us on race day.”

Adam Morgan said: “When you end up P23 after race one after contact through no fault of your own, you don’t expect to end up with a fifth and a first in the next two. The car’s been fantastic, so a massive thanks to everyone at Cicely Motorsport. Two Mercedes’ on the podium – that’s not happened before. I was very determined there. I didn’t get a win last year, so it’s nice to get one so early on this year. I started to lose the front end towards the end of the race and Josh (Cook) was charging. Points make prizes! It’s always beneficial when you’re on the top step but just to get three results in the top ten is what you need. I’m buzzing!”

Micky Butler, Manager, UK and One Brand Motorsport Events, said: “Overall we’re very pleased with the weekend. The BluResponse wet tyre worked well in difficult conditions on the very slippery, low grip Donington track surface. We’re also pleased with the delta time, we were set a target by the organisers of keeping the difference between the available compounds between 0.8-1.0 seconds, and that’s exactly what we had this weekend. Both tyres performed as intended and mixed up the action throughout the field.”

Senna Proctor was officially reprimanded and his licence was endorsed with two penalty points for an incident involving Colin Turkington. As this was his third strike of the season, Proctor started race two from the back of the grid