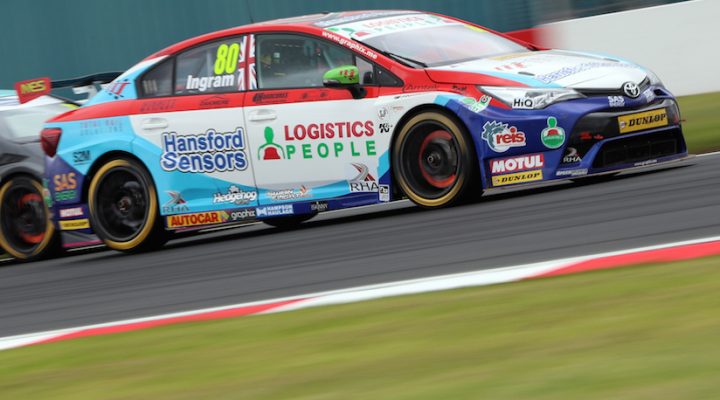 Tom Ingram has extended his lead in the 2018 Dunlop MSA British Touring Car Championship standings after earning a hard-fought victory in the second encounter at Donington Park.

Ingram, who started 13th, made a number of outstanding moves during the bout and he eventually passed Chris Smiley to take the win on lap ten.

It was Honda rookie Dan Cammish that blasted into the lead off the line as his Civic Type R got the better of Josh Cook’s pole-sitting Vauxhall.

As per race one, it was the cars running on the harder tyre compound that struggled to maintain their early pace and soon it was those on the Dunlop SportMaxx Prime tyre that were storming through the field.

That list included both Smiley and Ingram as they ganged up on Cammish at mid-distance, with the Toyota Avensis following the BTC Norlin Honda through. Smiley then ran wide on the exit of Coppice on lap ten, and Ingram eyed his opportunity on the run down to the final chicane. The championship leader made his move stick and the 25-year-old went on to take his eighth career BTCC victory – also becoming the first double race winner of 2018.

“That was absolutely crazy!” said Ingram. “It was very similar to the one back at Brands Hatch and the car was just so hooked up. It’s just incredible without the weight. I was really confident heading into the race, as I was losing that ballast. Spirits were high and we had the confidence in the car to make our way through.

“Chris (Smiley) is driving incredibly well – I knew he’d be a difficult man to pass. There were a couple of areas that I was stronger and I knew I’d have a chance of getting past. It’s mid-to-exit of a corner where we can really hook it up and take a tight line to get a good run. As soon as I got past Chris, my mentality changed to ‘let’s look after everything’. I clipped a bit of kerb at MacLeans and it pitched the car into a real slide! I’m sure Chris’ eyes opened wide when he saw me do that!”

Smiley stuck to the task to take a fantastic second place finish for BTC Norlin Racing, securing a best ever result for both team and driver.

“I knew we would be strong here and I was the most confident I’d ever felt coming into the weekend, but I honestly never expected to finish as high as second,” said Smiley. “I’ve known Tom for a long time, but the last time I raced so closely against him was in the BRDC Stars of Tomorrow karting championship back in 2006.

“He had a bit more speed than me in a few areas, and there was no point in doing anything silly that might have risked taking us both out. It’s fantastic to be up on the podium for the first time in the BTCC. The Civic Type R feels really solid. There’s a little bit more to come from me and a little bit more to come from the car, so once we find the sweet spot we hope to contend like this on a regular basis.”

Jack Goff completed the podium, after he too made huge progress from 12th on the grid. The WIX Racing with Eurotech star has often been the fastest driver during the opening two events of the season, and he now lies just eight points off the championship summit.

Cammish came home fourth, whilst Ciceley Motorsport’s Adam Morgan produced one of the drives of the season so far to grab fifth from Motorbase man James Cole.

Race one winner Cook had to settle for seventh ahead of reigning champion Ash Sutton. Rory Butcher was ninth for the ever-improving AmD-run MG squad, with the Scotsman also gaining pole position for the reverse grid race later today.