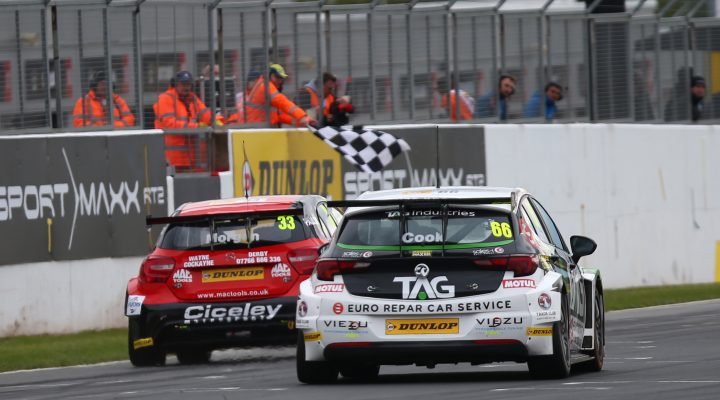 Pole-sitter Rory Butcher held on initially off the line, but reigning champion Ash Sutton and Morgan had nipped by the AmD MG6 before the end of the first lap.

There was drama further behind, which eventually sent Senna Proctor, James Cole, Sam Tordoff, Brett Smith and Josh Price out of the race. The multiple car collision left several machines stricken all over the track, and a safety car was subsequently called.

The all-important challenge for the lead came on lap eight as Morgan scythed his way past Sutton’s Subaru Levorg at the final chicane, with the latter immediately falling into the clutches of the chasing pack.

Rob Collard and Aiden Moffat were busy making progress as they both muscled their way by Tom Ingram’s Toyota in a duel attack for fourth, whilst Josh Cook’s Vauxhall was now in second.

When the dust settled it was Morgan claiming victory, just from Cook, whilst Moffat made it two Mercedes’ on the podium for the first time.

Collard claimed fourth from his charging stablemate Andrew Jordan, after the BMW Pirtek Racing man surged through from 18th on the grid.

Sutton secured seventh at the finish, ahead of another spirited drive from Matt Neal – the three-time champion leaving his best performance until last on the day.

Ingram was bullied down the order late on and finished eighth, with Tom Chilton and Jake Hill completing the top ten positions – the latter having made a number of eye-cathing passes.

The only other incident of note was a clash between Dan Cammish and Chris Smiley at the Craner Curves whilst battling for fourth – contact firing both cars into retirement.