Ingram picks up where he left off 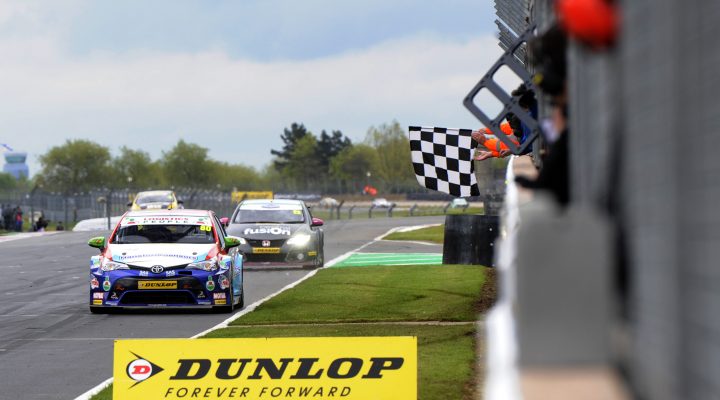 Tom Ingram left Leicestershire on Sunday evening with an extended gap at the head of the Dunlop MSA British Touring Car Championship, and another victory to his tally as well as a strong points haul in the bag having travelled to Donington Park with the maximum 75kg of success ballast aboard his Toyota Avensis.

The Speedworks Motorsport man drew level with motorsport legend Jim Clark in the all-time BTCC winners’ list following his race two triumph. Points with 14th and eighth in Rounds 4 and 6 respectively, ensured he would take a seven point lead to Thruxton, with an 18 point gap at the top of the Independents’ standings. Speedworks, too, holds an enviable position in its championships with third in the Teams’ table – the best of the single-car entrants – to go with a 16-point lead in the Independent Teams’ running. Quite the start to the season for the 2017 Indy champions.

“To come away with another very solid points haul and still leading three of the four championships, I would call that a pretty successful weekend,” said Team Principal, Christian Dick.

“We knew we needed to get rid of the ballast and hard tyres as quickly as possible if we were going to fight for a decent result, so we took a double hit in race one. Fourteenth probably exceeded our expectations in the circumstances, and with most of our main championship competitors finishing in roughly the same area, it was the perfect exercise in damage limitation.

“With the weight gone and the faster tyres back on the car for race two, Tom produced a truly stunning drive. We had been thinking the top six may be possible and were hoping to luck into the reversed grid draw for race three, so to storm through the way he did and make it look as easy as he did was simply breathtaking.

“The last one was more of a struggle again with the ballast back; the extra weight means you work the tyres harder, which increasingly hurts your performance and whilst that prevented Tom from being able to attack, to keep pace with the battle for the final podium position I thought was very impressive.

“I’m incredibly proud of the way all the Speedworks boys are approaching each race weekend, and to arrive carrying more weight than anybody else and leave having increased our advantage is testament to the fantastic job that each and every one of them is doing. We’re in good shape right now and of all the circuits on the calendar, Thruxton is arguably the one that punishes ballast the least due to its fast, flowing nature. Having taken two podiums there last year, I think we can go back feeling quietly optimistic about pushing for a strong set of results.”

“Another very positive weekend,” echoed Ingram, “And one over the course of which we learnt a lot. We genuinely struggled on Saturday, although I’m pretty confident in saying that at least seven tenths of our nine-tenth deficit to pole was due to the weight.

“That left us out-of-position and slightly on the back foot going into race day, and we deliberately decided to take the bullet as early as possible by putting the hard tyres on for race one. It was a strategic gamble, but it was one that had paid off last year and it worked again. I knew I would be super-vulnerable so just wanted to stay out-of-trouble and get to the end. We managed to hold on to bag a couple of points, and then effectively our weekend started from there.

“Race two was very similar to the one we won at Brands Hatch. We knew we had the pace with the weight taken out and it was great fun scything through. The Avensis was so hooked-up – simply incredible to drive. I fully expected Chris [Smiley] to be a tough nut to crack but I could see I was stronger in a couple of areas and once I got a little bit of an overlap, I didn’t need asking twice!

“Our speed there went to show just how much of a factor ballast plays at Donington – and that was evident again in race three, with the weight back on-board. I made up ground wherever I could, but after that, with everybody around me being significantly lighter, I was a bit powerless really.

“Still, to finish eighth was a decent result and looking back overall, it’s pretty cool to have now won the same number of BTCC races as Jim Clark, who is an absolute legend of the sport. While I couldn’t ever dream of going on to achieve the same kind of results as he did in his career, it’s still a nice statistic to have and gives me even more motivation to carry on winning and hopefully emulate another of his accomplishments in ultimately taking the series title.

“Next we go to Thruxton, which is one of my favourite circuits on the calendar – a truly awesome, old-school challenge. It’s likely to be another uphill battle on Saturday, but then hopefully we can pull it back on Sunday – and besides, we went there last season carrying full ballast and came away with three top four finishes. I’ve got a fantastic team behind me who give me one hell of a car every time we take to the track, and it keeps on getting better and better – so let’s see what we can do!”