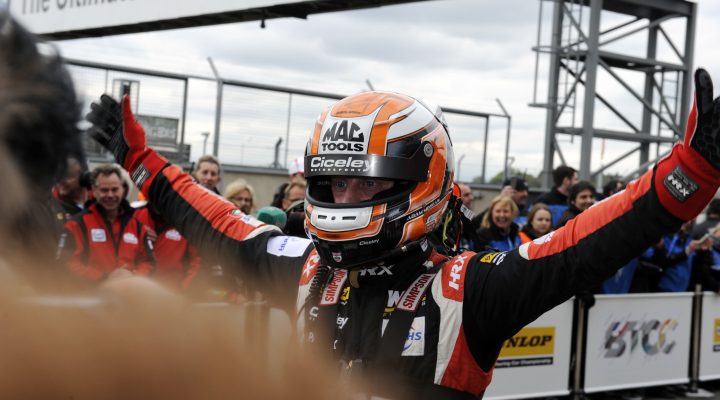 It was quite a weekend for the trio of Mercedes-Benz A-Class cars in the Dunlop MSA British Touring Car Championship at Donington Park. Ciceley Motorsport’s Adam Morgan showed pace throughout and recovered from 23rd in race one to a storming race three victory while Tom Oliphant notched a maiden top ten finish.

Meanwhile, over at Laser Tools Racing, Aiden Moffat sealed a pair of podium finishes – meaning race three was the first time that there’s been two Mercedes’ drivers spraying the champagne on the podium since the A-Class arrived in the BTCC some four years ago, though the outfit have had two drivers take top three results before, only after the intervention of a post-race judicial.

Morgan’s day didn’t go swimmingly from the get-go. Thirteenth in qualifying was the result of a tricky wet-dry session and the Lancashireman was keen to make progress through the points-paying positions. However, team-mates Oliphant and Morgan got together, forcing the latter off the circuit and plummeting down the order.

“That was frustrating,” said Morgan post-race. “I was running the harder tyre which the regulations state we must run in one race of a weekend and here they were the slower tyres, so Tom would have passed me anyway. I was off the track and in the gravel and thought my weekend was ruined.”

He fought back to 23rd spot by the end of the 16-lap encounter. Race two saw Morgan’s pace rewarded. Running the prime Dunlop SportMaxx tyre, and without success ballast, he was able to storm through to fifth with an inspired drive – including a stunning double pass at the chicane. That fifth spot set him up nicely for the final race of the weekend and by the tricky double-apex right-hander at Coppice in race three he was second.

A safety car then bunched the pack and leader Ash Sutton was forced onto the defensive with the harder Dunlop compound bolted to his Subaru. Morgan was able to make his move for the lead on lap eight, hooking up the A-Class on the inside of the penultimate corner before sealing the deal at the chicane. Race one winner Josh Cook in the Power Maxed TAG Racing Vauxhall chased him hard to the very end but Morgan didn’t put a wheel wrong, holding onto victory by a couple of tenths of a second to make it five different BTCC race winners from the opening six rounds.

Race three had a semi-reversed grid with the top nine finishers from race two being turned upside down, so Adam started fifth on the grid. With some brave driving on the opening lap he charged up into second place exiting the tricky double-apex right-hander of Coppice Corner. At the end of the opening lap, a safety car period bunched up the field leaving Adam on the tail of race leader Ash Sutton ready for the restart.

By lap eight, Adam was ahead, diving through on the inside at the Chicane. Behind him was race one winner Josh Cook (Vauxhall Astra) who chased Adam to the very end, the pair split by never more than a few tenths of a second. Adam, however, never put a wheel wrong to secure victory, the fifth different BTCC winner in the opening six races, and closing the Ciceley man to within seven points of championship leader Ingram.

“When you get fired off in race one and finish 23rd, you don’t expect a fifth and a win from the weekend!” said Morgan post-race. “The car was just fantastic here and I was really determined to get a win and it all gelled. I am so happy for all the Mac Tools with Ciceley Motorsport team because we didn’t get a win last season but we have fought back over the winter. The car feels fantastic and proof of the pace of the Mercedes is that Aiden Moffat in the Laser Tools Racing car, built by Ciceley, took third so for the second time we had two Mercedes-Benz A-Classes on the podium.”

Ciceley Motorsport’s Tom Oliphant enjoyed yet another solid weekend, securing his first top ten finish with pace in all three races comparable to that of the top three drivers. Oliphant’s intelligent, aggressive and determined driving style is already paying dividends for Ciceley Motorsport and its partner Hexathron engineering – headed by the vastly experienced Marco Calovolo.

His interpretation of data and his technical input is assisting with the setup of both of the team’s cars. Oliphant was the third driver home on hard tyres in race two and in race three, a fantastic drive saw him gain 16 places after being caught up in a crash at Craner Curves and having to pit under the safety car.

Ciceley Motorsport’s Commercial Director Norman Burgess said: “What a weekend! You can never predict the BTCC and we have seen that again today. Adam was gutted after race one as he felt his day was over but he knuckled down and fought back like he has never done before.

“It proves that you just can’t give up because you never know how your day will turn out and to come away from race two with a fifth was astonishing but a win at the end of the day was exceptional.

“We are very proud to have Adam driving for Mac Tools with Ciceley Motorsport because he gets better all the time. Our many Mac Tools, Fuchs Lubricants, Lunar Caravans and Pallex guests were given the perfect result and we go to Thruxton, a circuit kind to our car, in optimistic mood.” Aiden Moffat added to the Merc magic with two visits to the Donington Park podium, coupled with an Independent-class victory at the famed circuit.

The site of his maiden BTCC victory last year, Donington is proving to be a circuit the young Scot relishes visiting. Fifth in qualifying, in difficult, mixed conditions showed straight-off-the-bat that Moffat was a challenger top threes and come race one, it rang true as he stormed to third.

“That was an important result. We were all a bit deflated after Brands Hatch,” explained Aiden. “The car has been developed a lot of over the winter and it felt so good, so planted.

“As it gets older, the car just gets better! It felt great and gave me the confidence to push.”

Third place meant a second row grid-start for race two and it was damage limitation for Moffat with the harder-compound Dunlop SportMaxx rubber and 57kg of success ballast to contend with. A point and 15th spot wasn’t the end of the world.

Race three, without the weight and the more optimal Dunlop rubber for the conditions, Moffat flew by 12 cars to finish on the podium once again, moving him up to sixth in the Drivers’ standings and third in the Indy running.

“The car feels better than ever,” added Moffat. “Our qualifying pace is often not as good as race pace but this weekend we were well up on the grid and we could race at the front.

“That made me both more determined and confident and to go away with three trophies and two bottles of Champagne is a great feeling! It is the consistent pace across the weekend that is most reassuring: we can deliver wet or dry, with weight or not.

“We know that Thruxton, where we go next, is a good track for our car so we will hope to build on this weekend’s results.”