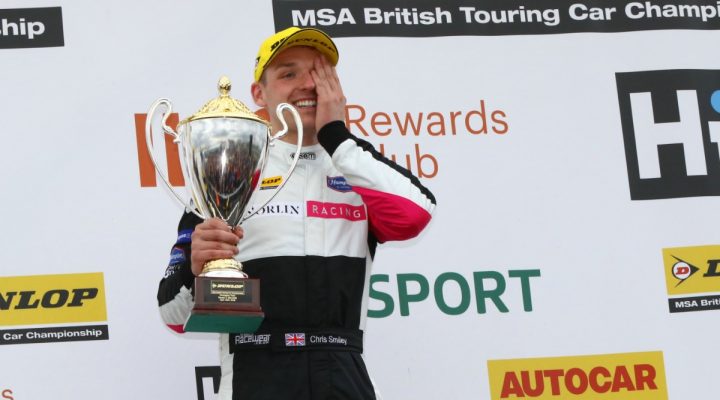 BTC Norlin Racing’s latest outing, at Donington Park just over a week ago, was its best yet in the Dunlop MSA British Touring Car Championship, with Chris Smiley’s first podium finish in the series the highlight.

The team, competing in its second BTCC campaign, managed second with Chris Smiley and seventh for team-mate James Nash to kick the weekend off in fine fashion with their strongest qualifying session to date.

With both cars running the hard Dunlop SportMaxx rubber in race one, it was a case of damage limitation to an extent. Smiley held firm through the opening stages before eventually losing ground at the Craners on the way to a solid points finish with seventh. Nash rounded in 18th and the team turned their attention to the second encounter.

Unfortunately for Nash, he was unable to start race two, having suffered a loss of engine oil on the way to the grid. Smiley, though, flew away from the line and into second place by the end of the second lap which turned into the race lead come lap nine. Tom Ingram was charging hard, however, and despite the Norlin man’s best defensive efforts, he couldn’t quite keep the Toyota at bay.

He did, though, hold off a rather feisty looking Dan Cammish as well as Jack Goff, who, also wielding an FK2-gen Honda Civic Type R, was desperately trying to clamber onto the podium – eventually doing so at the expense of Cammish in the factory Honda.

The reverse grid draw saw Smiley eighth in the final race of the day, while after his non-start in race two, Nash began from the back of the pack.

Smiley steered his Honda as high as fourth before contact with Cammish brought an end to his chances. Nash, meanwhile, clambered up to 12th and points – meaning a gain of an impressive 20 spots.

“Race one was a disappointment and not starting race two was frustrating for all but hats off to the BTC Norlin Racing team for their hard work and changing the engine to get me out in time for race three,” said Nash.

“I can’t ever remember starting a race so far back before. I think the starting lights must be in Leicestershire and the back row in Derbyshire! Certainly, from where I was sat I couldn’t see them so when the guys in front of me went, I set off too!”

“Watching me come through the field was hopefully a good spectacle for the spectators and for those watching at home on television. Though, in the car it was a bit frustrating to be honest.

“I know that there’s time to come in the car and finding that half a second or so we’re currently missing would make a huge difference.”

“It was a great weekend at Donington Park!” added Smiley. “I got my first podium in race two with second.

“Running the hard tyre in race one was survival but I had a respectable finish in seventh. In race three, I had a little bit of contact at the Craner Curves which cost me what was potentially another podium on the cards.

“But, all in all it was a very positive weekend and there’s no other feeling in the world like standing on that podium. A big thanks to the team at BTC Norlin Racing and all our fantastic sponsors who without them this could not be possible.”

An extremely proud Team Boss, in Bert Taylor, was overjoyed with the weekend’s spoils.

“The whole weekend was meteoric,” said Taylor. “It was tough at times, with the oil situation in race two for James and Chris’ incident in race three, but overall, we have shown that we can do this.

“Qualifying on Saturday really set out our stall in the BTCC. It showed that despite being a small team, that we have huge ambitions and potential.

“The results mean a lot to the team, and I am proud of everyone who has helped get us to this point.

“We have a great group of people around us, and we’re supported by a great selection of sponsors, to whom we are infinitely grateful for their support. Bring on Thruxton!”