HMS determined to shine on home soil at Thruxton 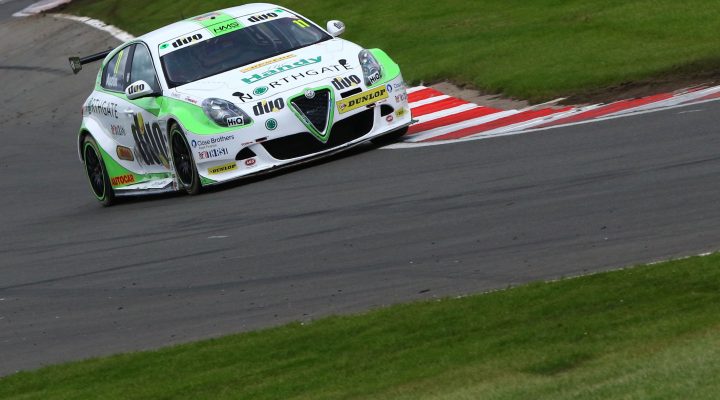 It will be the first chance for hometown supporters to see the new-for-2018 HMS Alfa Romeo Giulietta in race action on their doorstep at the much-loved Hampshire venue, and with only a day’s testing there – at the annual TOCA test – Rob Austin is fully expecting that Thruxton’s unique properties will mean Rounds 7, 8 and 9 will be somewhat of a leap into the unknown.

The track is one Austin relishes though, as do many of the drivers up and down the 32-car field. It’s a circuit where bravery is usually handsomely rewarded and the Evesham racer is eagerly anticipating putting the Giulietta through its paces in competitive trim around the flat-out sweepers.

“We’re heading a little bit into the unknown this weekend,” said Austin, “We’ve only had limited running with our Alfa full stop, but hardly any running at Thruxton.

“It’s such a unique track and is so much faster than anywhere else, we’ll just have to wait and see what happens. We did test last week at Snetterton and we certainly understand now where we went wrong at Donington Park.”

Due to the abrasive nature of the track surface at Thruxton, and the load which it puts on tyres, it’s the only event on BTCC calendar which doesn’t feature an option tyre choice with, instead, a specially-developed hard Dunlop SportMaxx compound used throughout.

HMS’ Alfa is still very much in the early stages of its development, following a ground-up build over the off-season after the team elected to make the switch from its Toyota Avensis to the Italian machine.

Having earned an emotional maiden podium with the Giulietta at Brands Hatch, last time out at Donington Park the DUO Motorsport with HMS Racing driver battled back from a challenging qualifying session and contact in race two to post a pair of points finishes.

“We’re obviously on the hard tyre all weekend at Thruxton, which requires certain settings to make it work properly,” said Austin. “At the point we’re at now, still developing the car and with lots of work to do each weekend, not having to think about running another tyre choice will be beneficial.

“Our aim is to stay in the top 10 all weekend, we just want points and a solid run after the relative disappointment of Donington. If we get it right at the weekend, though, we can be near the front and that’s what we’ll be working to achieve.”