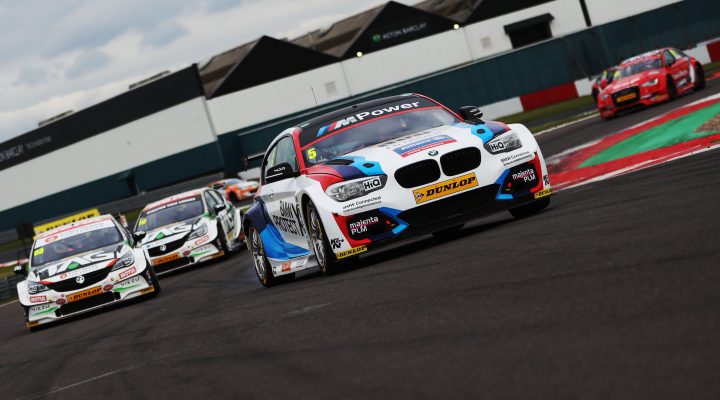 West Surrey Racing-backed Team BMW returns to the scene of a landmark victory at Thruxton this weekend determined to get back to winning ways in the Dunlop MSA British Touring Car Championship.

BMW scored its 100th BTCC victory at the Hampshire circuit last year as drivers Rob Collard and Colin Turkington took a win apiece in their WSR-run BMW 125i M Sports.

Local hero Collard, from Eversley, Hampshire, is looking forward to his home event, with average qualifying speeds of over 111mph making Thruxton the UK’s fastest circuit.

He has been on the podium for each of the past five seasons – including a memorable maiden victory there in 2017 – and is due to chalk up his 450th BTCC start in Race 3 on Sunday.

“Thruxton is my local circuit and I’m determined to give my home crowd something to cheer about,” said Collard. “I’ve finished on the podium there for each of the past five seasons and my win last year was particularly satisfying because it came after an intense battle in the early stages and a three-wide pass into the chicane that is one of the best moves I’ve ever pulled off.

“You have to give your rivals a lot of respect when racing wheel-to-wheel here and you have to look after your tyres in the early stages; which is something the BMW always allows me to do. I’m looking forward to it.”

Team-mate Turkington began his 2018 season with a podium finish at Brands Hatch and he’s aiming to add to his four previous BTCC victories at Thruxton.

He lies 10th in the Drivers’ Championship, but with the podium finishes having been shared by 13 different drivers from 2018’s opening six races, the Northern Irishman remains in the hunt for a third BTCC title and knows that a top-three result could catapult him up the table.

“We had a short test day at Thruxton last month and this gave us good a direction for the race weekend,” said Turkington. It is by far the most abrasive and demanding circuit on the calendar and this provides a great challenge, not least for the tyres.

“It’s all about tyre management. We need to use the two practice sessions on Saturday to get an understanding for what setup will work over a single qualifying lap, but also what will work over the race distance on Sunday. It felt amazing to celebrate BMW’s 100th BTCC win here last year and we will do everything we can to add further success to that story this weekend.”

Andrew Jordan, in the BMW Pirtek Racing side of the WSR garage, is a master of Thruxton’s high-speed sweeps. He took pole position there in the BTCC in three consecutive seasons from 2012-14 and has two wins and nine podium finishes to his name.

The 2013 BTCC champion has a 100 per cent finishing record so far in what has been the most closely-fought start to a campaign in living memory.

He knows that a victory would likely move him into the top six of the Drivers’ Championship, while reigning Manufacturers’ Champions BMW are also determined to move up from their current second spot in the points table.

“Thruxton is one of my favourite circuits because it’s so high-speed and there’s no better feeling than winning a wheel-to-wheel battle with another driver around one of the long corners here,” said Jordan. “You need to be brave, but you also need a well-handling car – like the BMW – that enables you to extract maximum performance from the tyres in qualifying, but also to look after the rubber over a race distance.”

WSR-run cars have scored 14 podiums and five wins in the past 12 seasons at Thruxton and more success will help BMW move up from its current second spot in the BTCC Manufacturers’ Championship.

Dick Bennetts, Team Principal, added: “We head to Thruxton aiming to add to the podiums we achieved at Brands Hatch and to re-establish ourselves at the head of the Manufacturers’ Championship.

“We’ve been pretty pleased with our speed in race trim at both Brands Hatch and Donington, whatever the weather conditions, although luck hasn’t always been on our side and converting that pace into results has been a challenge.

“This championship is shaping up to be the closest in years and we have to dig deeper than ever before to make sure we’re in the mix. A fully dry weekend would allow us to show the true potential of the BMW, as we were able to last year at Thruxton when we won two races.

“Thruxton is a circuit that holds some very happy memories for us, such as the double win we scored last year to give BMW their 100th BTCC victory, but memories don’t win you championships and we’re focused on this weekend.

“As a track, Thruxton places very high demands on tyres; so much so that the rules dictate all cars must use the hard-compound Dunlops in all three races to reduce the risk of punctures.

“Our BMWs have traditionally allowed our drivers to look after their tyres well over a race distance and this should mean we’re able to race our way towards the front as the laps count down.”