Collins: ‘We need to confirm our pace with podiums this weekend’ 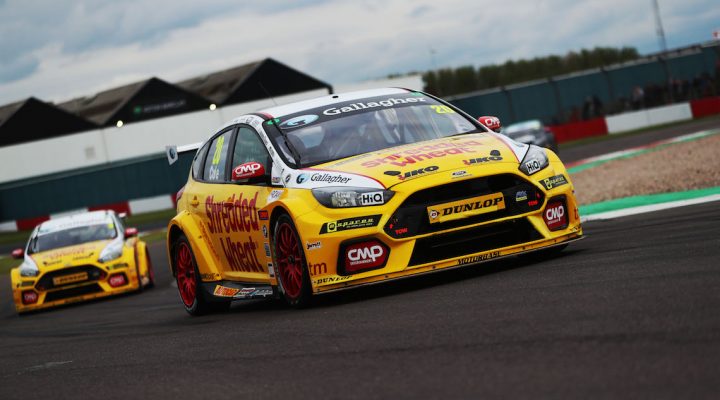 Team Shredded Wheat Racing with Gallagher has its sights set on a change of fortunes this coming weekend as the Dunlop MSA British Touring Car Championship arrives at Hampshire’s flat-out Thruxton Circuit.

The promising pace shown by Tom Chilton and James Cole has yet to yield a podium for the duo’s Ford Focus RS machines. However, the Motorbase-run squad heads to the South West track in confident form, with silverware high on the agenda.

“Thruxton is the fastest circuit and probably the most demanding on our BTCC calendar and one which on paper suits our new Focus RS,” commented Team Manager Oly Collins.

“To get a result at Thruxton you need to have everything right; chassis, aero, engine and driver. If one of those elements is lacking you’re likely to struggle, which is why it’s the most demanding circuit we visit.”

Thruxton has proven to be a happy hunting ground in previous seasons for the squad. After celebrating its maiden one-two result at Thruxton back in 2010, the Kent-based team has visited the podium no less than six times since, having taken five outright race wins and three podiums on the high-speed circuit and hopes are high of a return to winning ways this weekend.

“We know the car is performing well in all areas as are the drivers,” added Collins. “We had a great test there last month and have good reason to be confident. But this is the BTCC, and as we’ve seen in the first two rounds, it’s extremely close and anything can happen when you’re in a good position.

“We need to confirm the pace of our car with some podiums this weekend.”

“Thruxton is where the magic started for me back in 1998, at 13yrs old I was let loose every Thursday in a Golf GTI and Lotus Elise,” said Chilton. “It’s where I learnt about weight transfer and how to heel and toe, change gear and also what a racing line was too.

“I’ve qualified on pole here twice in the BTCC and last year took the fastest lap. We were fastest here in this year’s pre-season test before we made a race set-up change, so we know we have the pace around Thruxton.

“We’re very happy with the performance of the car, we now just need the luck to change so we can grab the results we all know we deserve.”

James Cole added: “I think that I speak for the whole team when I say that going into Thruxton we have a bit of a point to prove. We’ve shown that we have the pace during testing and the start of the year but because of circumstances, the results haven’t gone our way so far.

“I’ve had a little bit more luck than Tom, but we can look back at the races and pinpoint the reasons why the results should have been better so that gives us a lot of confidence that we should have a successful weekend at Thruxton.

“We just want two days of clean running and the chance to bring back a big haul of points for the championship, that’s our aim.”