Cammish leads the way in FP2 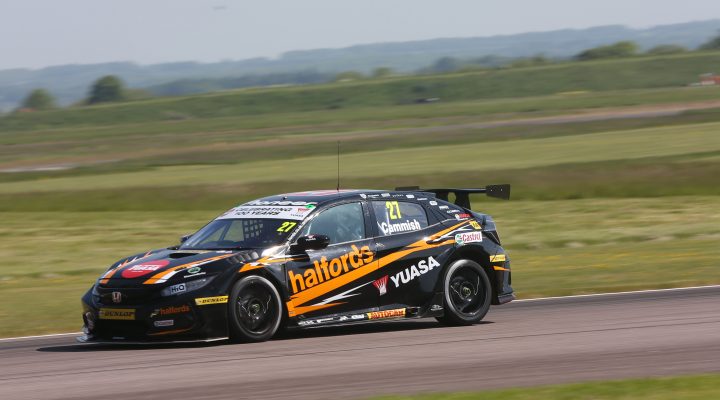 Cammish, on what Honda considers home soil in Hampshire with its UK base just up the road in Swindon, set his benchmark time just prior to a mid-session red flag stoppage, with Rory Butcher’s MG requiring recovery after an off in sector two. In fact, few went quicker following that interruption and the order remained largely unchanged as the minutes ebbed away.

Colin Turkington brought his BMW 125i M Sport around second fastest, having earlier set the pace in the opening practice session this morning. He was followed in third by Senna Proctor – showing once again that the Power Maxed TAG Racing Vauxhall Astras are set to be in the mix this weekend.

Mike Bushell notched the fourth fastest time in the Volkswagen CC – a car that is well suited to the speed, balance and poise required at the Hampshire Speedbowl – the site of its maiden podiums in the BTCC back in 2013.

Cammish’s team-mate, Matt Neal, fired the sister, current-generation FK8 Honda Civic Type R to fifth spot and, having secured pole position and a race one win at Thruxton last year, he’ll be aiming to kick on a notch further in qualifying.

Neal was followed by standings leader Tom Ingram in the Speedworks Motorsport Toyota, who, with the maximum complement of ballast aboard his Avensis is sure to be encouraged by his FP2 showing.

Andrew Jordan brought his BMW Pirtek Racing 125i M Sport around in seventh, followed by the WIX Racing with Eurotech’s Jack Goff and the sister Civic of Matt Simpson, while Brett Smith completed the top ten.

Qualifying is next on the agenda at 1525 – with all the action live over at itv.com/btcc/qualifying-live.