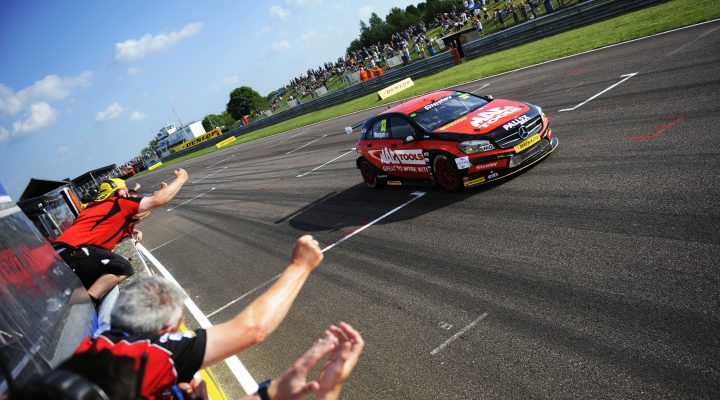 Mac Tools with Ciceley Motorsport’s Adam Morgan has moved to the summit of the 2018 Dunlop MSA British Touring Car Championship standings with victory in the final race at Thruxton, following on from points scoring finishes in the first two bouts in Hampshire.

Morgan’s second win of the season came in dominant fashion as he commanded the race from start-to-finish in his Mercedes-Benz A-Class.

The Lancastrian driver got a good getaway from pole position and he was able to defend well from an early attack from the Vauxhall Astra of Senna Proctor.

Morgan’s job was made slightly more comfortable when a charging Jack Goff hauled his Honda onto the back of Proctor’s Power Maxed TAG Racing’s machine, and a squabble for second ensued.

“I didn’t expect this, to be honest, because I knew Senna [Proctor] and the Vauxhall would be quick so I was anticipating being put under a bit of pressure, but I was confident and I got the start really hooked-up,” said Morgan. “After getting through the Complex for the first time, it was just qualifying lap after qualifying lap – it was, ‘let’s get on with this and go’. Senna kept me honest and pushed me all the way, and Jack [Goff] did the same later on but I was able to manage the gap and on the last lap, I was able to calm it down a bit and enjoy the moment.

“The car was on rails, which is credit to all the Ciceley guys, who have worked their socks off over the winter and early part of the season. To be leading the championship is a first for us, so now we’ll go to our favourite track carrying full ballast, and I’m looking forward to it.”

Sam Tordoff completed a solid day for Team GardX Racing with Motorbase by taking fourth, whilst Team BMW’s Colin Turkington fired himself back into championship contention with another top five finish this afternoon.

Josh Cook backed up his earlier win with a sixth place in the final race, and the Power Maxed TAG Racing ace now sits just one point behind Morgan at the top of the standings.

Speedworks Motorsport’s Tom Ingram provided some respite with seventh on a challenging day, having worked his way through the order after a non-finish in the opener.

Honda legend Matt Neal claimed eighth, which followed pole position, a race one win and a further podium in the second contest – underlining his desires to challenge for the title once more.