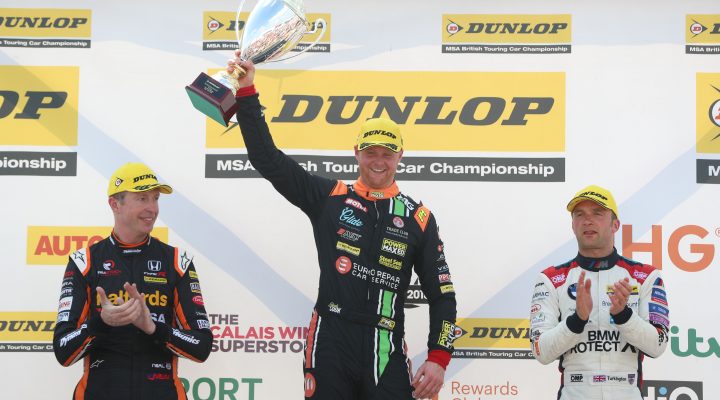 Josh Cook has won his second BTCC race in as many meetings, following up his recent Donington Park success with another stellar display here at Thruxton.

Pole-sitter Matt Neal couldn’t hang on off-the-line as Colin Turkington’s BMW nipped in front of the Honda Civic Type R on the run down to the Complex for the first time.

Dan Cammish’s Honda bogged down at the start, which allowed Sam Tordoff’s Ford Focus and Andrew Jordan’s BMW by in a tussle for third.

Progress was soon being made behind, however, as the Power Maxed TAG Racing duo of Josh Cook and Senna Proctor slipped past Team Shredded Wheat Racing with Gallagher’s Tom Chilton. Proctor’s advances were halted at that point but team-mate Cook was on a charge as he saw off Tordoff and Jordan in quick succession.

Cook’s Astra then blasted around the outside of Neal’s Honda at the final chicane and by lap 10 the local hero was challenging for the lead. The moment of truth came at the end of the next tour as he pulled an almost identical move on Turkington’s BMW 125i M Sport.

The Bath driver never looked back as he took the win on-the-road from Turkington and Neal.

“That was really good fun,” said Cook. “To win my first race at Donington Park was obviously enjoyable, but to do it from the middle of the pack like that was even better. It’s the first time I’ve been round here this weekend without any weight in the car. The Astra was on rails at the front and we were really strong through Church, which allowed us to carry good momentum onto the back straight.

“That said, the rear was moving around quite a lot which caused plenty of big sideways moments! All credit to the Power Maxed Racing guys – qualifying didn’t quite go our way, but we knew we had the pace and when the points are available, we’ll certainly take them.”

Team GardX Racing with Motorbase’s Tordoff held on to fourth from Jordan and Proctor.

Mac Tools with Ciceley Motorsport’s Adam Morgan made solid ground to take seventh from fellow championship challenger Jack Goff. Chilton had to settle for ninth at the finish, whilst BTC Norlin Racing’s Chris Smiley claimed his second top ten result of the day.