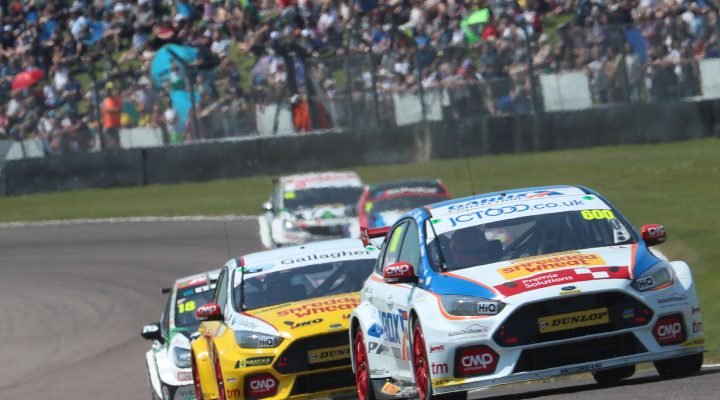 The Yorkshireman’s consistent pace and race-craft was finally rewarded, launching the Leeds-based driver into the top half of the championship standings and kick-starting his 2018 campaign.

Setting the sixth fastest time in qualifying on Saturday, Tordoff stated his intent early on with a flying start in the opening race. A brave lunge up the inside on the first corner fired the #600 Focus RS up into fifth on the opening lap before setting his sights on former BTCC champion Andrew Jordan in fourth. Tordoff skipped past the BMW on lap three as the duo headed down the start-finish straight on his way to fourth come the chequered flag and his first Independents’ race win of the season.

Carrying 48kg of success ballast on-board the RS, Tordoff made his way beyond Cammish’s Honda on the opening lap of race two to pinch third. Defending hard against his lighter counterparts, Tordoff’s steadfast efforts yielded just one further overtaking manoeuvre as the laps unfolded, crossing the line in fourth and collecting his second Independents’ victory of the weekend.

Continuing his fine form into the final race of the day, the GardX-sponsored racer’s controlled run was repaid with a third top four finish of the weekend, helping to ignite Tordoff’s championship challenge, pushing him into 14th in the Drivers’ standings and seventh in the Independents’.

“It’s been a really good weekend, which is exactly what we needed to kick-start our championship and overcome the disaster that we’ve had at the start,” said Tordoff.

“I was really pleased with qualifying and we’ve backed it up with three solid races; I can’t ask for any more than that really. The temperature has certainly made it more difficult for us this weekend, I didn’t really think that at any point we had the car to fight for the lead but overall I’m really happy.

“We’ve had three fourth place finishes and that’s a great points haul, and one that I’ve not had in a long time. It’s propelled us right up there in the championship but still outside the top ten which means we’ll go to Oulton Park again with no ballast, and that’s where we really need to make it count to get back into the fight for the championship.”

The weekend’s points haul also saw Team GardX Racing with Motorbase move up into 10th place in the overall Teams’ standings and seventh in the Independent Teams’ running.

David Bartrum, Team Principal, added: “It was a great weekend for Sam. He’s had three really great qualifying sessions so far this season but this is the first weekend that he’s been able to convert that into points. He has been very consistent this weekend and I’m really pleased with the way that the team has worked and that they’ve finally been rewarded with some points and silverware!

“Sam’s got some new trophies to polish now – he’s worked hard for those. He came here to get points this weekend to kick start his championship and he’s achieved that. We have two northern rounds coming up next, either one of which really could be classed as Sam’s home circuits and I look forward to seeing what he can do there.”