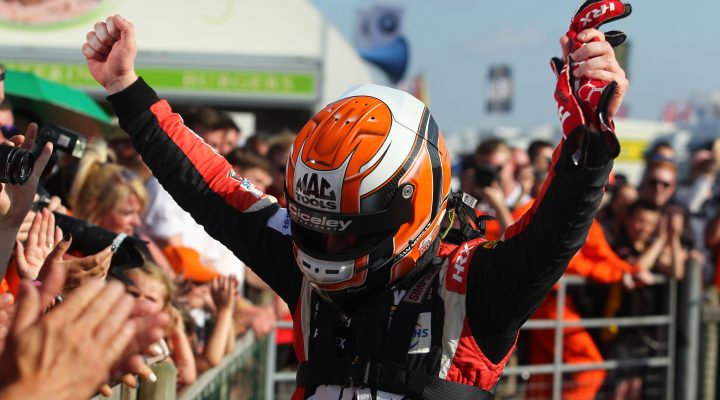 Mac Tools with Ciceley Motorsport’s Adam Morgan enjoyed a stellar weekend at Thruxton, notching a second win of the season in the Dunlop MSA British Touring Car Championship which moved him into the lead of the ultra-competitive series.

Morgan’s Mercedes-Benz A-Class headed into the weekend second in the title race and as a result had to carry the regulation 66 kilograms of success ballast for qualifying and the opening race. The extra weight certainly made its presence felt as Morgan battled to the 12th fastest time around the ultra-fast Hampshire speedbowl in qualifying.

“The weight certainly hurt us, but we were happy,” said Morgan. “I was aiming for the top 15 so the outcome was good and the lap I did was a committed one – I was hanging on for dear life through the fast bits!”

In sweltering temperatures, Morgan’s car bogged down off the line and lost ground to the pack but he soon battled his way back into contention, diving past the sister Fuchs Lubricants-backed Mercedes-Benz A-Class of Tom Oliphant at the ultra-fast Church Corner before setting off in pursuit of the pack ahead.

“I completely messed up the start,” said the Lancashireman. “By the time I had worked through the traffic, the gaps had opened up ahead of me and with the weight I was carrying, I just couldn’t catch them.” He finished a frustrated 14th but would run without success ballast as a result in race two.

Morgan charged his way up to seventh in the second bout. That result put him in contention with the reverse grid draw and when the magic number was revealed, the Ciceley man’s ball was drawn, meaning he’d start the final race from pole position.

Now carrying 27kgs of success ballast after taking seventh place in race two, Morgan drove the race of his life – building a gap on the opening lap then preserving his advantage while protecting his tyres on the unique, abrasive track surface. Behind him, a charging Jack Goff brought his Honda Civic Type R into second place with a couple of laps to go, but Morgan stretched the margin to score a sixth career win and his second of the 2018 campaign. With that, he also assumed the championship lead by a point heading into his home event at Oulton Park in three weeks’ time.

“I’d gone through the race in my head,” said a delighted standings leader post-race. “My plan was to get a good start and try to lead to the Complex and then just go! I pushed hard for the first six or seven laps but I had Senna Proctor pushing hard behind me. I panicked a bit when I saw Jack Goff closing after he got past Proctor but when I realised he wasn’t going to catch me, I actually enjoyed the last lap and I’m really chuffed for the team.

“We made some adjustments for race three with the hotter temperatures and although Thruxton has never been our best track we were good for straight-line speed today. Now we go to Oulton Park, which has never been that kind to us, with the full 75 kilograms of success ballast on-board as championship leaders, so that will be a challenge…”

Ciceley Motorsports Tom Oliphant endured a frustrating raceday in Hampshire. After qualifying a creditable 16th, Oliphants’s race pace looked in good shape after he finished 17th in race one on his first visit to the fastest circuit in the country in a front-wheel drive car.

Oliphant was looking forward to moving up the order in race two but unfortunate contact broke the suspension on his Phillips-backed Mercedes and he was forced to retire and start the final round of the day from the back of the grid. Oliphant’s pace saw him move from 32nd to finish a fantastic 19th and although disappointed with his race two incident, he was left optimistic and looking forward to the opportunity to show his ability on home turf at Oulton Park.

Ciceley Motorsport Commercial Director Norman Burgess added: “To be the championship leader in a series as competitive as this is just awesome. Adam’s performance in that last race was exemplary – he never looked under pressure and never put a wheel out of line.

“It was a brilliant drive and one richly enjoyed by our Mac Tools, Lunar Caravans and Pallex guests who enjoyed the sweltering conditions and the perfect finale to their BTCC experience at Thruxton. Oulton Park will be a challenge for us but we go there more optimistic than ever and hope to avenge last year’s bad luck.

“Tom Oliphant has had some terrible luck so far this year. He has immediately taken to the Ciceley Motorsport Mercedes and his lap times are right up there. Once he gets the rub of the green he will be fighting at the front, of that we have no doubt.

“Hopefully, Oulton will be the end of his wretched luck and he can show his supporters exactly what he is capable of! Tom has still had a great start to the season and is more than holding his own with the championship’s established drivers. Watch this space!”