WIX Racing with Eurotech seals more silverware for the cause 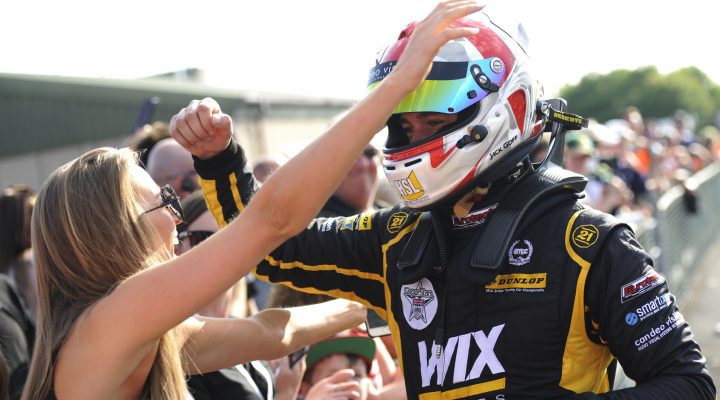 WIX Racing with Eurotech headed to Hampshire’s Thruxton circuit off the back of a strong start to the 2018 Dunlop MSA British Touring Car Championship, with victory and a podium to its name from the opening two race weekends of the campaign.

Brett Smith’s qualifying performance, with third spot and his best grid slot to date, looked to have signalled the team’s intent for the weekend but from there on in, things didn’t quite go to plan. Jack Goff’s Honda Civic Type R was proving a source of frustration as it struggled to supply the pace he’d been expecting around a circuit at which it traditionally thrives. He lined up 14th for the opener.

Smith, unfortunately, was unable to capitalise on his second-row slot in race one as, in track temperatures topping the 35 celsius mark, his car bogged down off the line – easily done with stickier than anticipated tyres due to the heat, said Tim Harvey at the time from the ITV Sport commentary box. Still, he rounded in eighth for a solid points haul.

Matt Simpson, in the Eurotech-run sister Type R baring Simpson Racing colours, was in the thick of it in the opener and would be pleased with a points finish and 12th. Goff, with 48kg of success ballast on-board, came home just behind his stablemate in 13th spot – a points score for each of the trio.

With success ballast now by the wayside, Goff capitalised to move through the pack to eighth. Smith made a much better start this time around and was making good progress until an off caused irreparable damage, forcing a frustrating retirement while Simpson held his own, battling to score points once again with 14th.

In the final race, Goff put in one of the standout performances of the day to fire his Honda from eighth to second spot. Simpson battled hard to 12th and with a triple-points score, elevated himself into the Independent Drivers’ standings top ten. Smith once again suffered race-ending damage and harbours 12th position in the same tally as a result. The team find themselves just three points off of the Independents’ summit heading to Oulton Park.

Eurotech Racing Team Principal Jeff Smith said: “All in all, it was a very successful Sunday. It looked at times like it might be a disappointing one but on the whole the team and drivers did a fantastic job. Jack’s drive to the podium in the third race was just phenomenal, Brett’s qualifying performance was incredible and Matt showed brilliant pace in quali and all three races – and was good value for three consistent points finishes as a result. So, a great job all round.”

“We’ve been struggling and we were scratching our heads a little bit,” added Goff, who’s sitting pretty in fourth in the overall Drivers’ standings. “We knew we should have been fast around here. Last year the car was quick and there was no reason why the car shouldn’t have been even faster this year.

“When we qualified down in 14th we realised we had some real problems going on. The lads worked hard overnight trying to figure out the issues and we think we found it heading into race one. We played a bit conservatively and then into race two we tried a bit more and it was good.

“The car felt strong towards the end of that race then we honed it slightly again heading into race three and with a couple more laps it could have been a different story. I’m glad we’ve got the issue behind us and certainly in the last race the car was so much stronger and it allowed us to race.

“At Donington Park and early on at Thruxton we just didn’t have the pace to race. It was clear for all to see that in certain areas of the track that we were struggling.

“We go to Oulton Park carrying a little bit of success ballast which will hurt us but there are a lot of people around us carrying weight too. The guys and girls at WIX Racing with Eurotech did an all nighter and they’re as determined as I am to find the issues and get some nice points finishes at Oulton Park and continue it on throughout the rest of the year.”