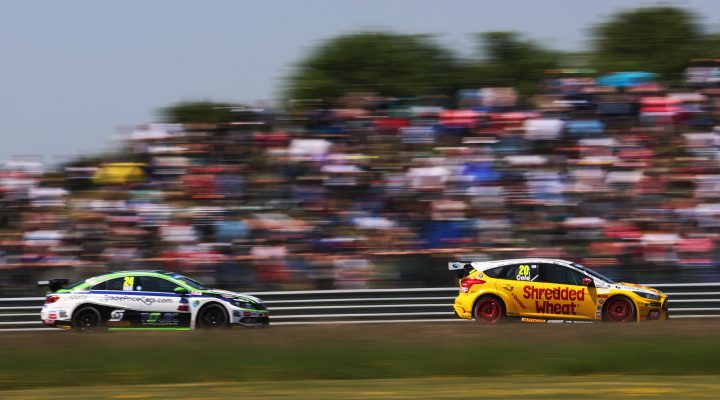 Oulton Park in Cheshire is the next stop for the Dunlop MSA British Touring Car Championship this weekend and Team Shredded Wheat Racing with Gallagher has its sights set on the podium.

Three convincing points finishes for the Motorbase-run squad at Thruxton last month helped to bolster the squad’s position in the standings, with Tom Chilton leading the charge for the Kent-based outfit. The 33-year-old secured an good haul of points for the title campaign and is eager to carry that momentum forward on the challenging 2.26 mile Island configuration.

“The best thing about Oulton Park is the fans,” said Chilton. “We’re really on the limit there and it’s great for them to get so close to the action and really feel a part of it. It always has a great atmosphere there.

“We need to keep moving up in the championship. We were really happy to grab some strong points at Thruxton and I’m hoping to carry that form into this weekend.

“We should be confident that we had a great qualifying car at Donington Park and the tyre and track temperatures are going to be a lot more similar at Oulton. I think we’ll have a strong qualifying and the aim for me is get two podiums this weekend and give our championship campaign a real boost. I’d love to get back into the top 10 in the standings by the end of this weekend.”

Team-mate James Cole had a weekend to forget last time out but nonetheless the Liverpool-based racer has reset after the trip to his bogey circuit and is looking to reclaim his impressive early round form and put claim to some silverware on his home circuit.

“Oulton Park is a special circuit for me; it’s where I first started racing and also where I won the Formula ford championship back in 2007 which set me on the career path to BTCC,” said Cole. “It’s a great circuit and I can’t wait to attack it again. It’s a special meeting that always has a great festival feel to it which makes the racing even more fun and enjoyable.

“It’s a challenging place to go and hopefully the weather will be in our favour. We’ve learnt a lot over the last couple of rounds and racing in the high temperatures at Thruxton means we can take that data into Oulton Park. I’m looking forward to picking up from where I left off at Donington Park, getting back into the top six and staying there.”

Oly Collins, Team Manager, added: “Thruxton was another positive learning weekend for us with the RS, which resulted in some decent points finishes.

“It’s the first time that we had run the RS and our 2018 driver line up in the higher temperatures. With track temps nearing 40 degrees it was somewhat different to what we’ve been running in this year. So going into Oulton Park, we’re ready for whatever the English weather can throw at us.”

Both Chilton and Cole are ballast-free heading into Saturday’s qualifying session, so hopes at the outfit are high in the search for a strong starting position ahead of Sunday’s three contests. Chilton in particular has set competitive lap times in the Focus RS – securing top eight qualifying spots during all three meetings so far this season.

“Oulton Park is definitely a circuit where qualifying is key. Qualifying has been one of our best attributes this season so hopefully that pays dividends,” added Collins. “If it’s dry all weekend it can be difficult to overtake there. Oulton is hard on brakes so we’ll be keeping an eye on that area of the car.

“Historically, Oulton Park has suited the rear wheel drive cars, but hopefully we can change that. We’re light so there is no reason why we shouldn’t be right up the front. James and Tom are both looking forward to it as it’s a circuit they’ve both gone well at in the past.

“With the pace that we’ve shown so far this season, the podium can’t be far away!”