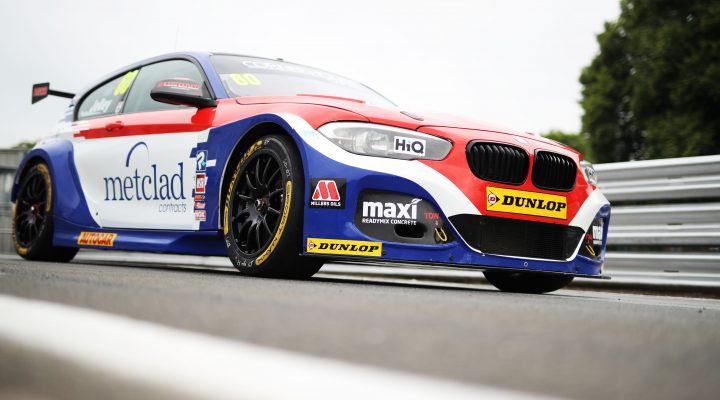 Oulton is one of the more difficult circuits on the calendar for overtaking, as evidenced by the total pass count topping 200, rather than the 400 we saw over the opening three weekends.

In qualifying, Matt Simpson put in the perfect lap, two-tenths of a second ahead of Sam Tordoff to secure his maiden pole position, with Tom Chilton third.

All three race winners in 2017 used Dunlop’s Option-Soft tyre, and three of the top four went down that route for the opener on Sunday. The only top-four driver on the medium compound tyre, Team Shredded Wheat Racing with Gallagher’s Chilton, started well – moving beyond stablemate Tordoff at lights out and off after race leader Simpson.

Simpson kept his head down into Knickerbrook and set about sealing his first BTCC win. In the pack, there were notable manoeuvres from Rob Austin on Brett Smith, and a clinical move from Colin Turkington on James Cole which was voted the #ForeverForward fan-favourite in race one.

Simpson kept his cool and completed a dream triple-header; qualifying on pole, securing the fastest lap and scoring a lights-to-flag maiden victory. Chilton held on to second to take his and Motorbase’s first rostrum of the season.

Chilton inherited race two pole for Motorbase after Simpson’s weekend was brought to a premature end thanks to engine trouble. Clinical and decisive overtaking moves by Turkington saw the champion quickly climb the order – passing Tordoff, Andrew Jordan and Chilton to steal the lead, ahead of a charging Matt Neal on Option rubber. Chilton produced a stellar performance, holding third for the remainder of the race.

Neal looked strong in second but Turkington was a level higher still as he secured an emotional first win of the season. Fans voted Tom Ingram’s move on BTC Norlin Racing’s Chris Smiley as their #ForeverForward overtake of race two, while Rory Butcher made the most ground, claiming 12 places.

Austin was drawn as reverse grid pole-sitter with Rob Collard the only driver in the top three running the Dunlop Option-Soft tyre. As ambient temperatures pushed 27 degrees, things were hotting-up on the grid for the race, and Collard produced a trademark swashbuckling start to steal the lead from Austin.

A red flag and restart handed Austin another chance but Collard flew off the line once again and into first, with stablemates Jordan and Turkington following Collard through – earning West Surrey Racing and BMW a podium lockout. Fans voted Turkington’s lap six move on James Cole as their #ForeverForward favourite.

Stephen Jelley left Cheshire as top mover with a total of 19 places gained across the three rounds. Race three produced the most overtaking action (119), while Josh Cook made the most ground in one race (15).