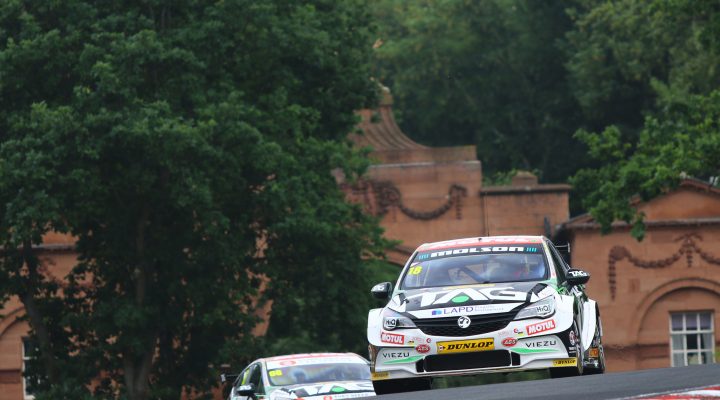 Power Maxed TAG Racing were riding the crest of a wave ahead of Rounds 10, 11 and 12 of the Dunlop MSA British Touring Car Championship at Oulton Park, with Josh Cook just a point off the Drivers’ standings summit and the team leading both the Manufacturers’ and Teams’ tallies.

Results didn’t quite follow for the outfit, though, with ballast always costly around the undulating Cheshire circuit and clear air in qualifying hard to come by.

Cook managed two clear runs and just 20th position – though only 0.8 seconds from pole, such was the competitiveness of the session – while Senna Proctor took up 26th ahead of the opener.

Cook found himself alongside then-standings leader Adam Morgan – damage limitation would be the watchword. He passed the Mac Tools with Ciceley Motorsport man in race one, finishing 17th and holding station in the championship running. Proctor fought hard before technical issues saw him slip back to a frustrated 28th.

Both drivers started the second encounter well. Contact at turn one, though, had Cook off and into the gravel at Cascades. He rejoined but the damage was done, forcing him into a precautionary pitstop. Conversely, Proctor was able to make good on his start, keeping out of trouble in tight surrounds at Oulton Park as he sliced his way from 28th to 16th.

After a red flag caused a restart in race three, Cook scythed his way through from the back of the pack to 12th place – an indicator as to why he is where he is in the championship running. Proctor’s progress was also strong – making up yet more ground to an eventual 12th spot.

Power Maxed TAG Racing finds itself right in the hunt for honours – second in the Manufacturers’ championship, third in the Teams’ with Cook fifth and Proctor 11th in the Drivers’ chase.

“We knew from Thruxton that the weight I’d be carrying into this weekend was going to slow us down,” said Cook.

“It’s a shame that we had a component failure during qualifying, but the guys did really well to get me back out for the last two laps.

“I think if I’d had more track time I could’ve bettered my time, but with the company I was in, I was fairly happy with 20th.

“Race three, the car really came alive, and I’m happy with the ground I made up after the restart. On the good side, we bagged some more points and haven’t lost too much in the championship hunt.”

Proctor added: “An electrical fault in the opener caused me to drop back to 28th, but finishing 12th in the last race was a great result for all the team and my sponsors.

“We struggled with the weight around the hilly circuit on Saturday, which made Sunday that bit more difficult. However, I’m now looking forward to my home circuit, Croft, in just two weeks-time.

“It’s one of my favourites on the calendar, so I’m really champing at the bit to get back out next weekend and bagging us some more points”

Technical Director Martin Broadhurst added: “Even if a race event doesn’t go our way, we can draw a number of positives from it.

“Every weekend is an opportunity for us to learn and gather information, and the relentless heat and uphill nature of the weekend has given us invaluable data.

“Croft is notoriously a rear wheel drive circuit, but I’m confident that we can make up the points we missed out on at Oulton Park.”