Austin: ‘We’re very close to hooking it up now…’ 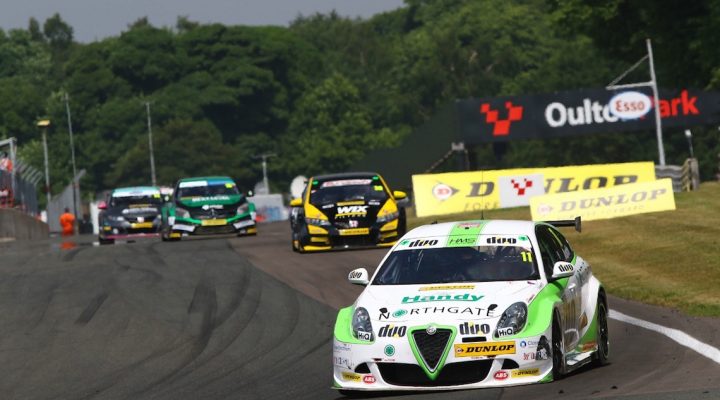 Evesham racer Rob Austin says his target for this coming weekend’s Dunlop MSA British Touring Car Championship visit to Croft Circuit is to be the top front-wheel drive competitor, at a track which traditionally favours his rear-wheel drive competition.

Heading to North Yorkshire for rounds 13, 14 and 15 of the season, which will be contested this Sunday, 24th June, the DUO Motorsport with HMS Racing driver is carrying realistic expectations into the fifth event of 2018.

Last time out at Oulton Park in Cheshire just over a week ago, Austin was on course to steer his Alfa Romeo Giulietta to a richly deserved season-best second place in the third of the event’s races, until differential failure with just a few laps to go triggered a bitterly disappointing retirement.

While the whole team was left crestfallen with the second rostrum of the season so near yet so far, the increasing competitiveness of the Swindon squad’s new car – which is still very much in development – means there is a lot of positivity in the air as the BTCC reaches its half-way point.

“Oulton Park was a rear-wheel drive circuit which saw the BMWs get two out of three wins and a podium lock-out in race three, but Croft usually hands the rear-wheel drive cars their biggest advantage of the season by far,” explained the DUO, Northgate and Close Brothers backed driver.

“With that in mind, you have to be realistic and alter your expectations and, unfortunately, that means we are extremely unlikely to be challenging for a podium in race one. Once the success ballast comes into play, and with the reverse grid for race three combined with some luck, chances might open up but I think our realistic target has to be to aim to be the top front-wheel drive car.”

After taking a memorable podium on the opening weekend of the season at Brands Hatch, when the newly constructed Alfa Romeo had only experienced three days of running, Austin freely acknowledges the direction of travel with set-up thereafter went the wrong way.

“We really turned a corner with the car at Oulton and it felt great, there’s still more to come but we took a big step in the right direction and are absolutely on the right track now – I’m very excited for the rest of the season,” he added.

“I’ve said all along that the DUO Motorsport with HMS Racing boys have built an incredible car and once we hook it up it’ll be a winner. We are getting very close to hooking it up now, our tails are in the air and we are hungry for silverware!”