Ash Sutton at the double 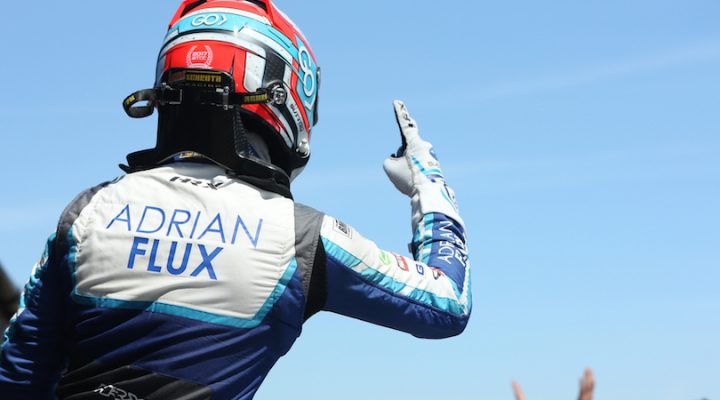 Reigning BTCC champion Ash Sutton has taken his second win of the day at Croft, this time fighting back past the Speedworks Motorsport Toyota of Tom Ingram to take the victory.

Sutton, Ingram and the other Subaru Levorg of Jason Plato went three-wide on the run down to Clervaux on the opening lap and when the dust settled it was Ingram’s Avensis that had been muscled to the head of the pack.

Following the fallout of all that early action we were left with Sutton leading Ingram, who had Colin Turkington’s BMW closing him down in third.

As he was in the first race, Sam Tordoff was settled in fourth in the Team GardX Racing with Motorbase Ford Focus – a position he would again hold until the finish. Incredibly it is the sixth time that Yorkshireman Tordoff has finished fourth on his return to the series, although he’s yet to make the podium this season.

Two BMWs fought tooth and nail over fifth place with Rob Collard initially holding off stablemate Andrew Jordan. That all changed late on, however, as Jordan made his move and the Team BMW 125i M Sport of Collard suffered with a puncture.

Collard’s woe promoted Team Shredded Wheat Racing with Gallagher’s Tom Chilton up to sixth, ahead of Halfords Yuasa Racing’s Matt Neal. Three-time champion Neal has fought hard for points in both races so far in the new Honda Civic Type R and the BTCC legend is still nicely poised in the overall standings.

Senna Proctor (Power Maxed TAG Racing) and Daniel Lloyd (BTC Norlin Racing) took eighth and ninth repectively and were further rewarded with a front row start in the reverse grid race, which takes place later today. The MG of Rory Butcher rounded out the top ten with the Scotsman having shown solid pace throughout the day.

Josh Cook endured a heart-in-mouth moment when he went off at high speed on the opening lap, but the Vauxhall man was able to recover after a long trip across the fields.

Ash Sutton said: “I don’t want to speak too soon, but it’s looking good. I have to say, the car has been phenomenal – Adrian Flux Subaru Racing have done a mega job preparing it. The Subaru Levorg has been absolutely awesome. When you are following someone, you try to assess where their weak points are, and the last two corners here prioritise traction. I’m not sure if I caught Tom [Ingram] napping, but he didn’t make it too hard and didn’t shut the door on me. After that, I focused on trying to build up a gap to him and it was full push – I couldn’t have stretched it out much more than that. It helped when Colin [Turkington] started to put Tom under a bit of pressure towards the end, but he’s doing well for a front-wheel drive car round here.”
Tom Ingram said: “Again, the car felt absolutely fantastic, even with more weight on-board. I was expecting Ash’s [Sutton] move early on; being in a rear-wheel drive car, I knew he was going to be quicker so I didn’t want to put up too much of a fight with the bigger picture in mind. They’ve obviously worked wonders with that car between Oulton Park and here. I did start to struggle a bit towards the end, which enabled Colin [Turkington] to have a bit of a look, but we’re currently up against each other in the championship so I knew I had to try to take some more points off him.”
Colin Turkington said: “I love to win – the feeling I had at Oulton Park is like no other – but when you go into a weekend carrying full ballast, it’s a process. The first part of that job is to qualify reasonably well, before gradually shedding the weight and making progress. It’s all about steady-away, which is how my day is going. It’s very difficult to pass around here; I was faster than Tom [Ingram] through the last sector, but he was faster than me along the back straight, so it was a bit cat-and-mouse. It all depends how much you want to risk. The BMW is serving me well today, especially with the success ballast on-board.”
2018 Dunlop MSA British Touring Car Championship – Round 14 – Croft Circuit