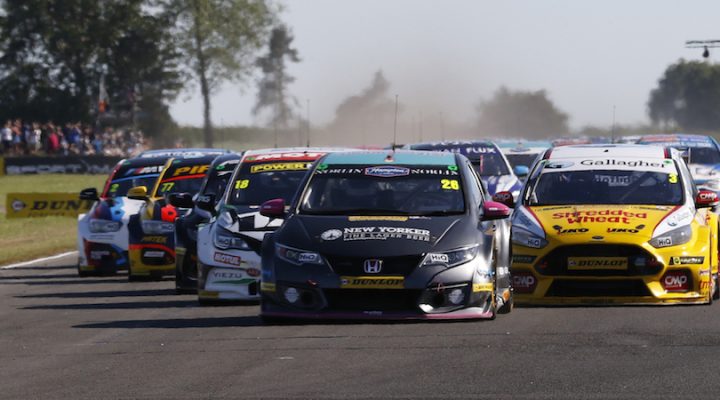 Not only was it the first ever BTCC win for Yorkshireman Lloyd, made even sweeter by coming at his home circuit, but it was also the first top-step success for BTC Norlin Racing in Britain’s premier motorsport series.

Tom Chilton took second for Team Shredded Wheat Racing with Gallagher after the Ford Focus man made most of his ground off the line. Chilton blasted away in his striking yellow machine as the lights went out and he was immediately into second, having started the race from fourth. For a period it looked as if Chilton may challenge Lloyd for the overall laurels but he eventually had to settle for second. The result, however, still represented massive progress for a team that struggled during qualifying yesterday.

Senna Proctor completed the podium positions for Power Maxed TAG Racing, yielding yet another great return for the fledgling Vauxhall-backed squad. The team endured a difficult meeting last time out at Oulton Park and looked set to miss out on more trophies here in North Yorkshire, so Proctor’s podium is a perfect tonic for the outfit going into the mid-season summer break.

It was the fight for fourth that proved the most contentious as three champions in the shape of Matt Neal, Colin Turkington and Ash Sutton battled it out. Neal’s Honda held sway early on but he was then passed by Sutton’s Subaru, before the two clashed again late on. When the chequered flag fell it was Neal in fourth from championship leader Turkington and today’s double winner Sutton.

BMW Pirtek Racing’s Andrew Jordan was nudged down the order to seventh, whilst Sam Tordoff completed his solid day with eighth place for Team GardX with Motorbase. Tom Ingram – arguably one of the drivers of the day – finished ninth while Tom Oliphant provided some respite on a difficult weekend for Ciceley Motorsport to take tenth.

Daniel Lloyd said: “I’m absolutely buzzing – just lost for words and so, so happy. This win means so much to the team – we didn’t even know if we were going to be out this weekend after the damage at Oulton Park, but the boys all worked so hard and to repay them like this is amazing. It’s been a big weekend for us, and to finish with this kind of result is just awesome – absolutely perfect. I wasn’t nervous at all in race three; I know I’m quick and I knew I could do it and I’m so pleased with the way we did do it. All credit to the team. This is only my fourth day in the car, so to come out and win is unbelievable. Emotionally, I was having to hold it all together for the last few laps, but I didn’t back off because that’s when mistakes tend to creep in. By taking the win and setting fastest lap too, we really did it in style.”