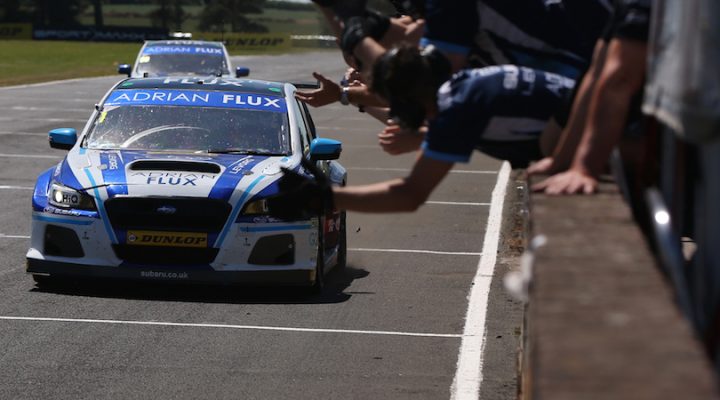 Sutton took a relatively commanding lights-to-flag victory as team-mate Plato scrapped with BMW Pirtek Racing’s Andrew Jordan behind for much of the contest. Jordan nipped into second on the run down to turn one on the first lap, and the BMW 125i M Sport driver spent most of the race trying to defend from Plato. The 2013 champion couldn’t hang on, however, and eventually had to relinquish second to the #99 Subaru Levorg through the chicane ahead of Hawthorn Bend.

Things got worse for Jordan as, struggling with his rear tyres, he threw away a podium place after running off-track through Clervaux late on, which allowed the impressive Tom Ingram by to complete the rostrum order in his Speedworks Motorsport Toyota Avensis.

Plato homed in on Sutton during the closing laps, but the latter always seemed in control and the reigning champion cruised to his first win of the season.

Sam Tordoff produced a masterclass defensive drive to take fourth as he held off the Team BMWs of Colin Turkington and Rob Collard for the entire 17-lap race, as Power Maxed TAG Racing’s Josh Cook looked on from behind.

BTC Norlin’s Daniel Lloyd performed admirably in front of his home fans to take eighth in the older shaped Honda Civic Type R, whilst Halfords Yuasa Racing’s Matt Neal battled through to ninth in the all-new version of the car. Jordan recovered to round out the top ten positions.

The main incident of note happened on the opening lap when Rob Austin’s Alfa tangled with Stephen Jelley’s BMW, which brought about a brief safety car period.

Ash Sutton said: “This definitely felt a long way away two weeks ago – I certainly didn’t expect to be standing where I am now. Like last year, we opted to run the hard tyre in race one. That was always going to make life a little bit harder, but sometimes you have to take a gamble and it paid off again – although the old boy was coming back at me by the end! Fortunately, I had a little bit left in the tank so whenever he closed the gap, I could open the tap again. I’m a little bit further behind in the championship than I was at this stage last year, but you never give up trying and I always give it my best shot and now there’s a little bit of light at the end of the tunnel.”
Jason Plato said: “This is what I get out of bed for in the morning – it’s what I’ve put my whole life into – so when it goes wrong and you’re not in control, it’s just awful. It’s a real relief and a nice feeling to be back in a competitive car again. Quietly behind-the-scenes we have worked hard to find some more time from the Subaru and get it closer to where I want it to be. We’re still not quick enough on the straights, which is why it took me quite a long time to get past [Andrew] Jordan and I had to wait for his tyres to go off, but we’re off the back row and back in the mix.”
Tom Ingram said: “I’m really pleased with that; I genuinely didn’t expect to be able to come through, especially with so many rear-wheel drive cars around me. I had to remain mindful of where Sam [Tordoff] was to begin with and try to establish a gap, and then with AJ, I think he just missed his braking marker heading into Clervaux and went off – and I nearly followed him! That would have been a bit of a schoolboy error on my part. All credit to the team – to finish on the podium with the hard tyre, ballast and at a rear-wheel drive circuit is a great result.”