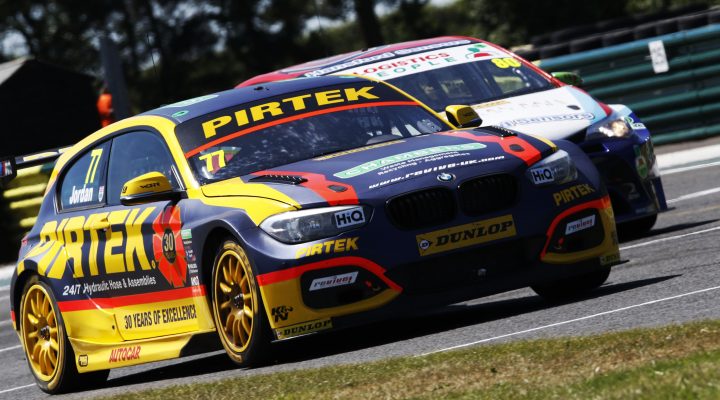 Former Dunlop MSA British Touring Car Champion Andrew Jordan is well and truly in the fight for another tin-top title, having enjoyed a consistent first half to his 2018 campaign.

The BMW Pirtek Racing driver completed a solid weekend on track at Croft last time out to go into the summer break having moved into the top four in the points standings.

“We’ve shown good pace in the car this season and there is still a long way to go in the title race,” he said. “We’re within striking distance of the top and it’s a good position to be in going into the summer break.”

Jordan headed into the fifth weekend of the season buoyed by a strong performance previously at Oulton Park and was confident of picking up another good haul of points at a circuit where his BMW 125i M Sport was expected to be strong.

Qualifying saw Andrew leading the BMW challenge in third place on the grid, a result that marked his best qualifying performance of the season to date.

Although he briefly got up to second when the opening race got underway, Andrew found himself shuffled back to fourth spot in sweltering conditions at the North Yorkshire circuit but a mistake at turn one saw him run off track and drop back down to tenth place.

A solid recovery drive in race two saw Andrew come through to fifth spot and he added another top six finish in the final race of the weekend after a race long battle with team-mate Colin Turkington and defending champion Ash Sutton.

The end result was more solid points to add to his championship tally with Andrew going into the summer break having moved up to fourth in the title race.

“It’s good to end the weekend having moved up to fourth in the standings,” concluded Jordan. “Qualifying went really well but for some reason in the opening race, we were struggling with oversteer in the car. I hold my hands up that I then made a mistake and was kicking myself over it because we lost a solid P4.

“We made some changes for race two and made some good forward progress and then there were more good points in race three despite being on the hard tyre.

“Okay so we could have scored more points this weekend but we’ve achieved our aim of moving up the standings going into the summer break.