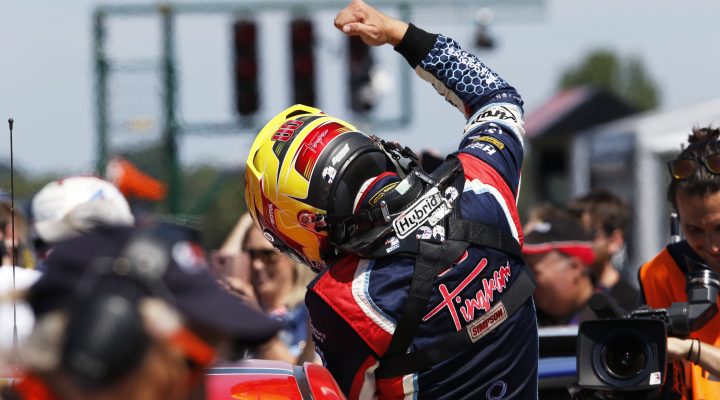 Croft is traditionally regarded as a circuit that favours rear-wheel drive machinery but Speedworks Motorsport’s Tom Ingram defied that notion on the way to a podium double in North Yorkshire which kept him in touch of the top of the Dunlop MSA British Touring Car Championship entering the mid-season break.

Ingram’s always been a fan of Croft and he duly set the pace in free practice before following up with fifth spot in qualifying – one of only two front wheel-drive cars inside the top eight.

The Independents’ champion made a strong start to race one, immediately gaining a place off the line to take fourth. After shaking off Sam Tordoff’s ballast-free Ford, he focussed on chasing down Andrew Jordan ahead and his pressure ultimately paid off, with the BMW Pirtek Racing man skating straight on at turn one with four laps to go to elevate Ingram to third.

With a larger complement of success ballast in race two, the 24-year-old brilliantly out-dragged the front-row-sitting Subarus of Ash Sutton and Jason Plato to the first corner. His lead wasn’t to last, with Sutton reclaiming the spot a lap later at the Hairpin but he held his ground to seal second, defending staunchly from Colin Turkington behind.

With 66kg of ballast on-board for the finale, Ingram steered his Avensis to ninth, completing a stellar points haul, enough to move him from fourth up to second in the overall Drivers’ classification – 19 points adrift of leader Turkington – and catapulting him back to the summit of the Independents’ Trophy standings.

Speedworks similarly returned to the top of the Independent Teams’ table, while advancing from seventh to sixth in the outright Teams’ ranking.

“Considering we arrived at Croft with the primary objective of minimising our points loss to Colin [Turkington] around what has always been predominantly a rear wheel-drive circuit and a very happy hunting ground for him, to come away with the second-highest score of the weekend and actually close on the championship lead is pretty phenomenal in my opinion,” said the Northwich, Cheshire-based outfit’s Team Principal, Christian Dick.

“As they always do, the Speedworks boys worked their socks off to progressively improve the car throughout practice and qualifying, which allowed Tom to really attack in the races and as ever, he was outstanding throughout.

“The Avensis was comfortably the best front wheel-drive car over the weekend, and we even took the fight to a lot of the rear wheel-drive cars, which was tremendously encouraging. The way Tom kept Colin – in a lighter BMW – behind him for lap after lap in race two was simply stunning. To manage the weight and the tyres as well as he did in every scenario was hugely impressive. He looked after the car when he needed to and wasn’t afraid to get his elbows out when required.

“To be back on top in both Independent tables and second in the overall Drivers’ standings is a fantastic way to sign off the first half of the season. Tom got absolutely everything out of the package at Croft, and in my view, his performance proves he is a driver ready to win this championship.”

“What a mega weekend!” echoed Ingram. “It’s fair to say we significantly exceeded our expectations at Croft, and the most exciting thing for me is that we’ve got the car working the way I want it to again after missing something at both Thruxton and Oulton Park. It was nice to have the old girl back.

“We laid the foundations for the weekend in qualifying, and to be one of only two front wheel-drive cars inside the top eight – while carrying 48kg of extra weight – was a fantastic start. Still, with so many rear-wheel drive cars around us, I genuinely didn’t expect to move forward in race one. It looked like Andrew [Jordan] just missed his braking marker heading into Clervaux and went off. I was so surprised, I nearly followed him myself, which would have been a bit of a schoolboy error!

“I think Ash [Sutton] and Jason [Plato] were a bit too focussed on each other at the start of race two, which offered me the opportunity to leapfrog them both into the first corner, but I knew Ash would come back at me given the speed they had all weekend. With the bigger picture in mind, I didn’t want to get caught up in any unnecessary incidents or take too much out of my tyres so I didn’t fight him too hard when he inevitably made his move.

“It was different with Colin, because we need every point we can get against him in light of the championship situation. He was extremely quick, but by the same token, I knew he wasn’t going to do anything stupid and all credit to the team – the car felt awesome even with more weight on-board and to take two podiums with a lot of ballast and at a rear-wheel drive circuit was a great result.

“Ninth was about all we were going to get out of the last race with the weight we were carrying and the standard tyre. I was really struggling to hold on towards the end, and that left me a bit powerless against Sam [Tordoff]. He was all over me and when he got a run exiting the hairpin for the final time, I wasn’t going to put him onto the grass. It was still another very solid top ten score and ultimately, what a great way to go into the summer break – with momentum on our side and firmly in the title fight!”