A mid-season break in name only… 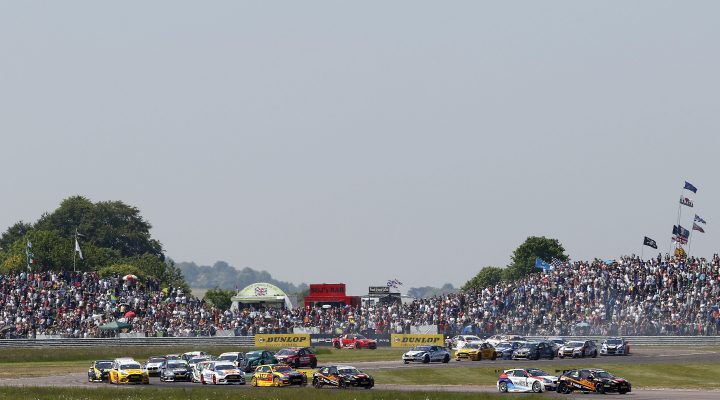 Snetterton will play host to the majority of teams and drivers up and down the Dunlop MSA British Touring Car Championship pit-lane this week at the annual mid-season test (11-12 July) with entry free for spectators.

As ever, btcc.net will be on hand to provide comprehensive coverage of all of the action as outfits search for those precious tenths-of-a-second as they gather data in Norfolk ahead of the Diamond Double 60th Anniversary race weekend there at the end of the month, as well as the second half of the campaign.

On-track activity and post-session reports, along with interviews from the paddock and the best of the day’s photography will be up live at the home of the BTCC online, btcc.net, with live timing also available here over the two days, meaning you can keep track of every driver’s progress as they rack up the testing miles.

On social media, we’ll feature text commentary over on Twitter alongside all of the latest news and views on Facebook too. Behind-the-scenes video and photo content will be the order of the day @OfficialBTCC on Instagram.

Get involved! Use #BTCC and make sure you tag us in your shots. Show us your photos and videos from the spectator banks and the paddock – we’ll share the best.

The sessions will run from 9.00am to 5.00pm on each day, with an hours’ break for lunch. Tyrrell’s restaurant and bar will be open both days, serving food and drink throughout the day.

The Dunlop MSA British Touring Car Championship will return to the event this weekend as part of the series’ 60th anniversary, Diamond Jubilee celebrations.

Returning to the Festival alongside the 2013 BTCC champion will be three-time champion Matt Neal in the all-new Halfords Yuasa Racing Honda Civic Type-R and Adam Morgan in the Mac Tools with Ciceley Motorsport Mercedes-Benz A-Class, while Power Maxed TAG Racing will bring one of its Vauxhall Astras with Josh Cook behind the wheel.

Making their Festival of Speed debut will be two of the championship’s most popular drivers in the shape of reigning Independents’ Trophy champion Tom Ingram with the Speedworks Motorsport Toyota Avensis and Rob Austin in the Alfa Romeo Giulietta of HMS Racing with DUO Motorsport.

Touring cars are always a popular part of the race schedule at the Silverstone Classic and, with 2018 being the 60th anniversary of the BTCC, Tin Top Sunday will pay homage to every decade of the revered series’ history with a line-up of unmissable on-and off-track activities.

Tin Top Sunday (22 July) will see racing action from the pre’ 66 touring car era with mighty V8 ‘Yank Tanks’ forcefully represented in the Transatlantic Trophy and the Gallet Trophy for Under 2-litre Touring Cars showcasing a fiercely competitive array of Mini Coopers, Lotus Cortinas as well as Alfa Romeos and BMWs. The Historic Touring Car Challenge will take us from 1966 right the way through to 1990 and the ever popular JET Super Touring Car Trophy (which races on Saturday, too) encompasses the period from 1990 through to 2006.

In addition to the tin top races, there will be a 60th anniversary parade on Tin Top Sunday featuring 60 spectacular BTCC cars, fronted by an Austin Westminster as raced by the late ‘Gentleman’ Jack Sears to win the very first BTCC crown in 1958, and the Adrian Flux sponsored Subaru Levorg raced by Ashley Sutton to win last year’s championship.

Of all the cars that will be joining in the celebrations this year, three in particular are worth seeking out in the paddocks: the Alan Mann Escort that won the title in 1968 with Frank Gardner, Doc Shepherd’s title-winning Austin A40 from 1960 and the whacky Volvo 850 Estate that will be reunited with former champion Rickard Rydell especially for the parade.

For more on the Classic’s BTCC celebrations, head to the links below:

Diamond studded track parade to mark 60 years of the BTCC