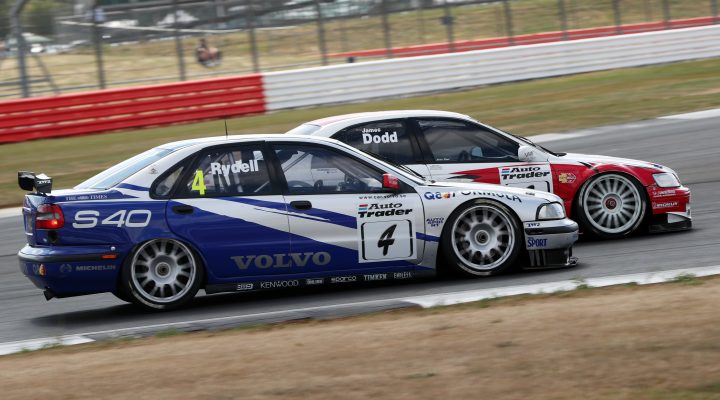 The Dunlop MSA British Touring Car Championship’s 60th anniversary celebrations continued at the Silverstone Classic this past weekend as Britain’s biggest motor sport spectacle warms up to the Diamond Double at Snetterton this weekend (28-29 July).

The star attractions were out in force in the much-anticipated JET Super Touring Car Trophy with all eyes on series hero Rickard Rydell to see whether he could recreate his race-winning exploits in the 1998 Volvo S40, 20 years on from his BTCC title.

After bringing the crowds to their feet by nosing into the lead early on, Rydell was ultimately forced to settle for second position behind the winning Honda Accord of James Dodd. Nevertheless, a third-place finish for 1989 and 1995 champion John Cleland in the Vauxhall Vectra ensured a popular podium line-up.

In the Historic Touring Car Challenge – another bumper grid, filled with recognised cars past like the Chevrolet Camaro, Rover SD1, Ford Capri and Austin Mini – father-son pairing Nick and Harry Whale surged to victory in the BMW M3 E30. Jeff Allam was a class-winner, too, wielding a Capri.

The racing action was complemented by a parade to mark 60 years of the BTCC, featuring racing cars spanning six decades from a glorious Austin A105 Westminster as raced by Jack Sears to the inaugural BTCC title in 1958, all the way to the 2017 BTCC title-winning Subaru Levorg GT. The country’s premier motor sport series returns from its summer break this weekend at Snetterton in Norfolk with a mouth-watering battle in prospect.

All three BTCC races on Sunday, 29 July alongside the rest of the day’s action will be broadcast live, free-to-air and in high-definition by the series’ longstanding partner ITV, on ITV4, via the ITV Hub and streamed live online at itv.com/btcc. Those in attendance at the circuit can stay in touch with the commentary and live timing from every session, available at btcc.net/live throughout the weekend.